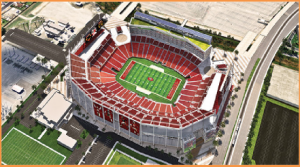 Levi’s Stadium, the new home to the San Francisco 49ers, is a $1.2 billion venue with 1.85 million square feet, seating approximately 68,500 and featuring 165 luxury suites and 8,500 club seats. Levi’s Stadium is the first U.S. professional football stadium to achieve LEED (Leadership in Energy and Environmental Design) Gold certification, a standard rating for the design and construction of ‘green’ buildings. LEED certifications are based on points awarded for materials and resources use, water efficiency, energy and atmosphere, and other factors. 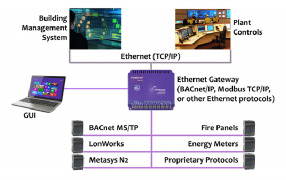 Not surprisingly, water is a huge issue for Levi’s Stadium, whether it’s for drinking and kitchen use, field irrigation or wastewater from the restrooms. Unitronics PLCs control the valves and VFD drives that manage the stadium’s water reticulation; the Unitronics PLCs use Sierra Monitor FieldServer QuickServer protocol gateways to connect to Automated Logic’s BAS via BACnet MS/TP for monitoring and control. Similarly, the AERCO hot-water boilers interface to the ALC system via the BACnet MS/TP interface provided by ProtoNode protocol gateways.

Stadium facilities managers can now prime water systems in anticipation of a big game day, monitor water pressure throughout the complex, and control the wastewater system to maintain optimal operation even with 70,000 visitors in attendance.

In addition to open stadium seating, Levi’s Stadium offers premium seating in its 165 luxury suites that include climate-controlled enclosed spaces and upscale catering provided by 22 kitchens. In each of these luxury suite kitchens, a Halton kitchen exhaust fan uses a BACnet MS/TP interface via ProtoNode to transmit valuable energy management and control information to the ALC system. Kitchen ventilation can be controlled based on numerous inputs, including whether luxury suites are empty or in use, or the external temperature at the stadium.

Being awarded LEED Gold certification is a big achievement for Levi’s Stadium, and they could not have reached that goal without the intercommunication and centralized monitoring and control made possible by Sierra Monitor products. 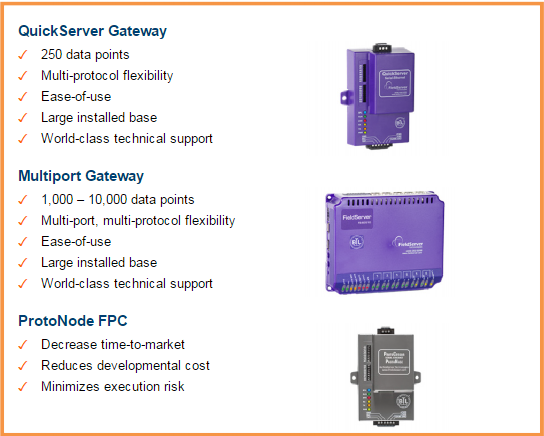