Do You Know How and What Your Smart Building Devices Are Connected To? 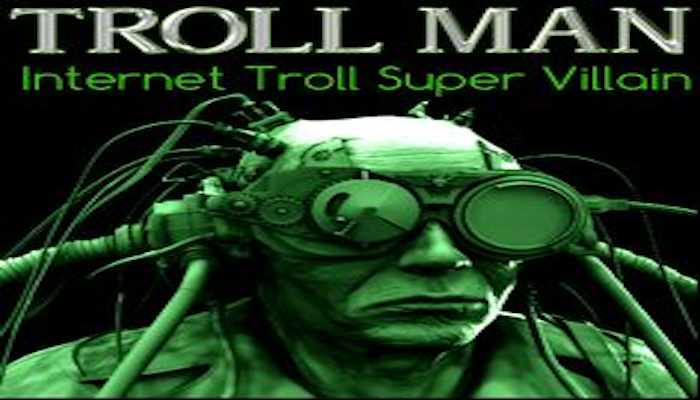 Okay… Your control system was installed a couple of years ago and you were handed riser diagrams, As-Builts, mechanical drawings, etc. and you were good to go.  Right?

Up until recently the standard implementation for a controls network was created by the integrator and given either a 192.168.X.X or 10.0.X.X IP schema.  In some cases the only way to access the system was from a PC on the same network.  In other cases the control network did not touch the corporate network, but it was accessible remotely.  This was done by purchasing a router/VPN from a big box electronic store and your ISP (internet service provider) supplied you with a public IP to access your front-end from anywhere in the world.

But is that still the way it is setup?

If it is, it is the right way?  Or it may have been set up correctly, but because of zero change management and oversight, your control network and corporate network have converged or holes have been punched in your security.

The following examples are possible representations of what a control network may look like or maybe what is has become after a few years of “a change here” and “a change there”.  It is important that you know your control system network configuration and keep your documentation up-to-date. 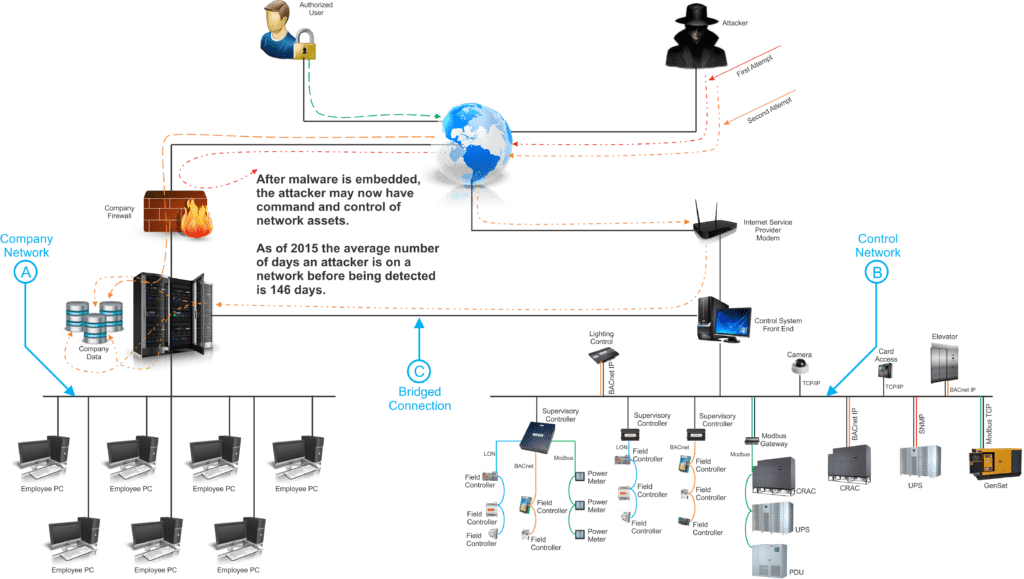 Example 2 – The control network and corporate network are air gapped.  There is no physical connection between the two. However, the control system is exposed to the world with a public IP.  The leaves the control system vulnerable to have infected payloads ready and waiting for anyone who accesses the system. 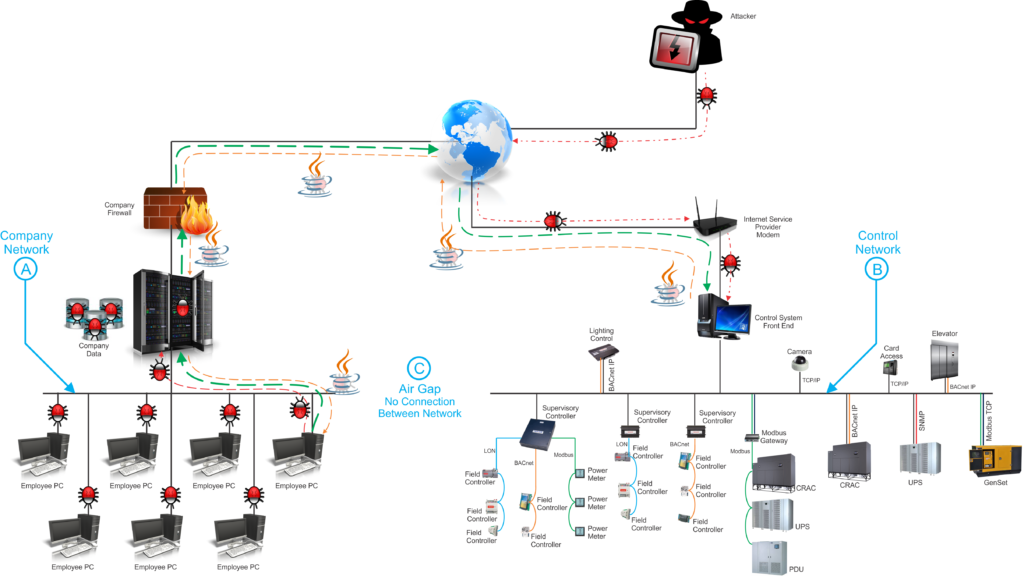 Example 3 – Everything in this example is behind the corporate firewall and is seemingly safe.  It has been my experience in some cases that the control system front-end is highly accessible and is used to check email, social media, etc.  This practice can either cause the front-end crash or a means for a threat actor to inject malware for data mining, command & control, etc. 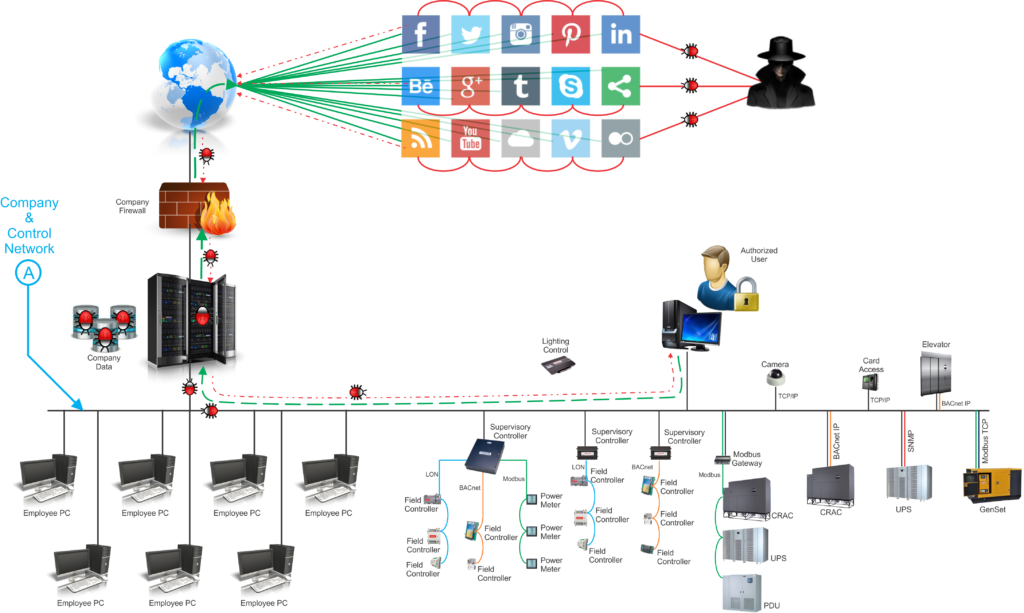 Example 4 – This example is little different in that there is a mix of public and private IP’s.  Certain parts of the system are exposed and some would think that others are not.  Depending on the system you have, most will allow tunneling, which means if the bad guy can get to a controller with attached devices, they can tunnel and command or damage the end devices. 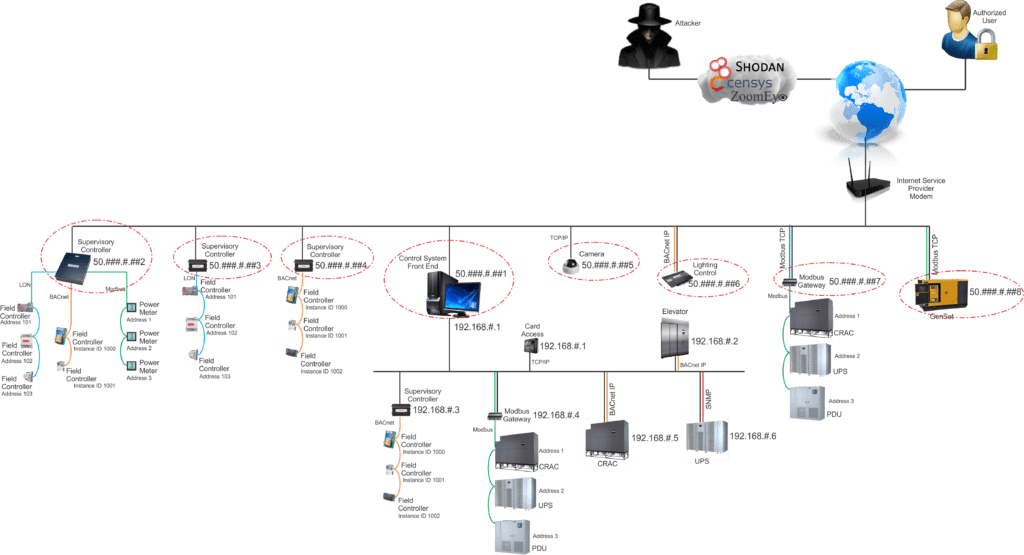 Example 5 – This example deals with the physical security of a control network.  In the example below, equipment with IP connectivity has been added to the network outside of the building.  Because typically there is never traffic monitoring of a control network, the bad guy connects something either inline to remotely access the network from the comfort of their home or temporarily connect and inject malicious software to perform whatever task they have chosen.

Example 6 – In this final example, there is a segment of the control network that is exposed with a public IP and the other segment is on an internal, private network.  At some point someone wanted or needed to get data from the internal networked control equipment the other network or vice versa, so they introduce a BBMD to route the traffic across the different subnet.   Using Shodan, Censys, or ZoomEye the bad will more than likely find the BBMD and then with FREE Bacnet software scan the network and find the devices on the other side.  With this FREE Bacnet software they now have unrestricted, no password needed, command and control of these devices.

If you haven’t reviewed your control system network architecture in a while, I suggest you do.  If you don’t have change management in place, you need to.  If you have any segment of your control network exposed to the world, work with IT and get it behind a high quality firewall.

The BlackHats are looking and probing and they have plenty of tools available to them to find you.  Let’s not make it too easy for them.

Fred Gordy is Director of Cyber Security at Intelligent Buildings, LLC and is responsible for the technology strategy and cyber security for control systems. Fred has focused on control system cybersecurity for the past several years and has built a network of cybersecurity professionals to grow knowledge for control systems at large. Fred's portfolio includes projects military bases, internet datacenters, national retail chains, an international media company, REIT's, and research labs to name a few. Fred is the cyber security blogger for ControlTrends (www.controltrends.org) and a regular quest on the webcast of ControlTalk. Fred has contributed and/or been featured in the Wall Street Journal, CNBC, Fox, HPAC Engineering, Retrofit Magazine, Building Context, Healthcare Facilities Today, and BOMA FacilitiesNet.
All Posts »
PrevPreviousDOE Invests $14 Million to Increase Efficiency of Nation’s Homes and Small to Medium Commercial Buildings
NextLynxspring’s Marc Petock Explains Project Haystack: “There’s no Point in Collecting Inaccurate Data.”Next