Why this is the Year You Must Go to IBcon! 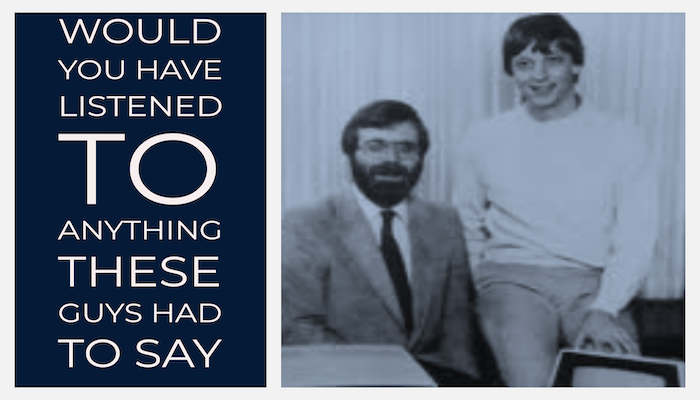 Imagine you are in Albuquerque New Mexico, the date is April 4, 1975. Two guys , one named Bill and the other named Paul, are telling you the technology world is getting ready to change. They ask you if you would like to invest in it?

The Bill and Paul I am referring to are not fictitious characters . They are Bill Gates and Paul Allen and April 4, 1975 was the day they started Microsoft.

Jim Young, the founder of RealComm/ Ibcon , and accurate predictor of technology trends thinks Microsoft is going to change the world again. This time in Smart Buildings.

I will not put words in Jim’s mouth. Watch this video, in which Jim explains what is happening in Smart Buildings and the role he perceives Microsoft is playing,. Learn how you can get first hand knowledge of what Microsoft is doing.

Will Microsoft be the next great ……. Microsoft?

Will you be part of it if they are?

Let me know what you think in comments. Will I see you in Nashville? Do you need a 10% discount code.

Yes, I know it’s late in the game to plan a trip to Nashville next week, but if there is any way you can make the trip, I believe you will be very happy you did.

This will be my sixth RealComm|IBcon and every year I have been amazed at what I learned and the contacts I made.

The PreCon Event starts next Wednesday, June 12th and the conference goes through Friday, so if you are feeling impulsive, don’t waste anytime registering now.

Each ticket purchased gets you into BOTH Realcomm and IBcon. These two co-located conferences bring together 13 dynamic education tracks, an expo floor that boasts state-of-the-art technology products and services specifically for the commercial and corporate real estate industry and opportunities to network with visionary leaders and experts in the industry.

To register online you will be required to pay using our secure server using your credit card. We accept Visa, MasterCard and American Express.

*Group Sales: For groups of 3 or more, please see our Group Sales Area.

As one of my teachers use to say, there are three types of business people in the world:

Let us know if we can help you or if you have any questions regarding this Event.

Hope to see you next week!

PS. There is a possibility the show is sold out, I still think it is worth reaching out to see if you can still get in.

PSS. If  the show is sold out , or you can’t make it to Nashville, no problem. Ken and I will be there and we will bring the conference to you. Subscribe to our YouTube Channel so you can watch live streams from Ibcon.

PSSS. If you are reading this after the show has come and gone, we have all the video highlights at ControlTrends. or the ControlTrends YouTube Channel.

Eric has been in the controls industry since 1979. His passion for controls and the desire to provide an easy way for HVAC professionals to keep up with the rapid changes in controls technology inspired him to create Controltrends.
All Posts »
PrevPreviousHow to Reset a JACE 8000 and Answers to The Most Asked JACE Questions
NextWhy Your Youngest Employee Should Do Your HVAC Social Media and You Should Not!Next