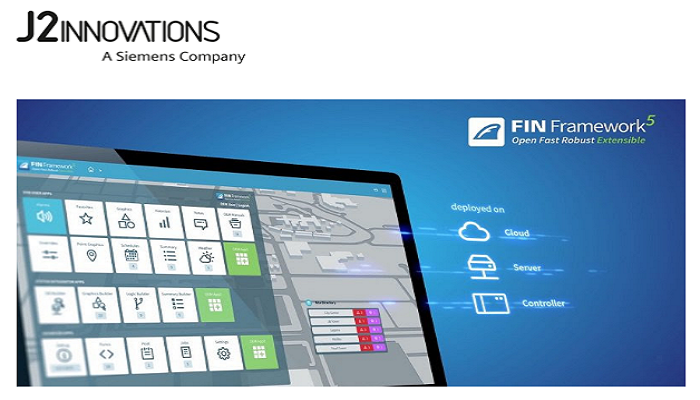 J2 Innovations is excited to announce the launch of FIN 5, for release this summer – the most innovative and advanced software platform for building automation and IoT Applications. With the Launch of FIN 5, the FIN Framework is now more Open, Fast, Robust, and Extensible

Software for building automation has a lot to offer building owners, facility managers, system integrators and users. From its inception, J2 Innovations has sought to simplify the software used to manage building automation systems and provide the most open, flexible, and user-friendly software on the market.

The first iteration of this was FIN Builder, a product that offered simplified and enhanced visualization graphics for 3rd party automation systems. FIN Builder then evolved into the FIN Framework; an all new approach to an open framework that included a full application suite for building automation and IoT. The FIN Framework technology is today sold globally to OEM partners, and in the North American market also sold through distributors as the brand, FIN Stack.

“Since the very beginning of J2 Innovations, we have set out to help evolve the industry by creating technology that covers the same bandwidth of functionality as traditional automation systems but is much simpler to engineer and operate, and is fully IoT compatible.” – Jason Briggs, CEO, J2 Innovations

Now, J2 Innovations is launching the latest incarnation of FIN Framework; FIN 5, the most innovative and advanced software platform for building automation and IoT applications. FIN is a software suite which provides monitoring, control, scheduling, alarming, visualization, integration, and analytics capabilities designed for OEM partners to customize and incorporate into their products or systems. FIN Framework is already used by a variety of system manufacturers involved in BAS, HVAC, lighting, and shading control in buildings.

The FIN 5 release contains many new features and additional benefits, including an all new database, and system configuration UI, to enable faster engineering.  A new template creation wizard also makes integrating controllers faster and easier, further reducing configuration time for systems integrators and OEMs. Numerous changes have been made to enhance product robustness. Lastly, J2 Innovations has added additional open APIs to help OEMs and developers further extend the framework, and has improved the connector framework to make it even more open for third party system and device integration.

Following J2 Innovations acquisition by Siemens last May, there is now a stronger emphasis on ensuring the FIN Framework follows latest standards in cyber security; security by design, regular penetration testing and fast update cycles are all key elements in making FIN most cyber-secure.

“Many of the quality assurance processes Siemens incorporates in their design and development are now fundamentally part of J2 Innovations’ new quality culture. I believe we’ve been able to strike a good balance between innovative and robust products.” – Alexander Rohweder, COO, J2 Innovations

FIN’s architecture continues to be the only platform for building automation and IoT that is fully based on the use of semantic tagging. FIN natively supports the Project Haystackopen standard for defining and communicating building related data across multiple instances.

In addition to FIN 5, J2 Innovations is also announcing FIN Cloud, which will be released in the near future. FIN Cloud adds to FIN Framework support for secure remote connection via the AWS (Amazon Web Services) cloud, greatly simplifying remote connectivity for multi-site building operators. FIN Cloud provides OEM partners with powerful support for SaaS architectures, using the Haystack open standard protocol over MQTT for the Edge to Cloud connectivity. FIN Cloud simplifies remote site management by use of fully authenticated certificate based security, with the connection to the cloud “pushed” from the site to avoid the complexity and difficulty working with IT departments.

The FIN Framework is now more open, fast, robust, and extensible than ever before.

For more information about FIN 5 or FIN Cloud, visit j2inn.com or contactsales@j2inn.com

Co-Founder and Co-Chairman of the CTA Awards. HVAC and Security Sales Engineer and Integration Consultant with over thirty years of industry experience.
All Posts »
PrevPreviousEpisode 322 ControlTalk NOW — The HVAC and Smart Building Controls VideoCast and Podcast. First 10 Readers/Listeners that send sshaw@sierramonitor.com an Email that Ken and Eric Sent you Win a Free Oil Field Cameo Hat!
NextEnergy Efficiency and Renewable Energy Job Fair Set for July 11, 2019Next