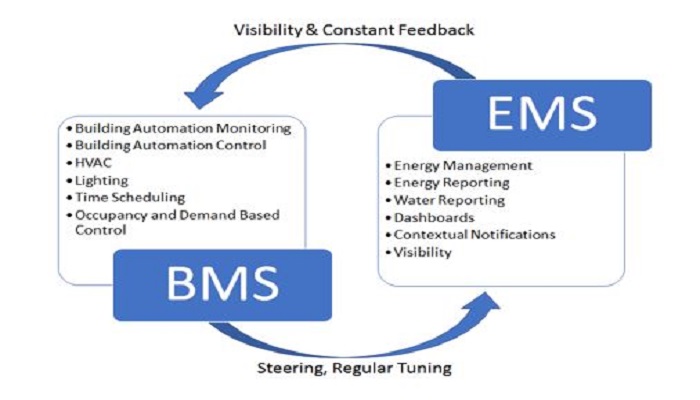 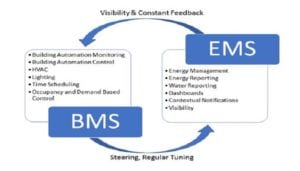 This article by Optergy‘s Steve Guzelimian, President and Nicholas Heydon, Australasia Channel Manager reviews the methodologies to achieve maximum operational benefits and financial rewards of a truly integrated building — complete with details from a large-scale project that validates their propositions. Click here to read the original article (with illustration and graphs) as it appeared in the August, 2017 edition of AutomatedBuilding.com

Introduction: This article explores using energy management systems (EMS) combined with building automation systems (BMS) to expose opportunities for improved building performance in commercial, retail, educational, government, healthcare, and office sectors. Combining both EMS and BMS into the one platform breaks down barriers allowing smarter control strategies and contextual alarms to be generated for building operators. Sharing data between these systems removes a “blindfold” from operators and creates visibility and context enabling a continuous feedback loop not previously possible.

As a consequence of continuous feedback users are able to tune buildings and gain direct benefits including energy savings and reduced operating expenses. This approach replaces performance degradation with a more productive operator who is in control and driving increasing building performance.

The whole of energy and building automation is greater than the sum of both parts.

Problem: For years building systems have consumed energy to keep its occupants comfortable and productive. As a consequence of normal operation, facility managers have faced technical and financial challenges. Managing these challenges to get the right economic outcome has not always been obvious.

We know that buildings are designed to architectural and engineering specifications. However once the building is delivered and the occupants begin using their spaces, it’s not uncommon to find out that the buildings are operated in dynamic conditions. To fulfil the building’s intended purpose, facility management has to juggle numerous operating tasks, such as energy expenses and costs related to maintaining their connected systems.

Competing demands for attention often cause a slow but continued performance degradation. Heating, Ventilation and Air-conditioning systems (HVAC) are high consumers of the building’s energy resources. A HVAC system’s performance degradation can be likened to a slow leak in tire pressure causing premature wear, poor fuel economy and ultimately resulting in breakdown and unexpected costs.

Building Performance: We often see building systems such as EMS, BMS, lighting, security and more that operate as standalone systems, with each as “automated silos” of information. These automated silos result in a lack of insight into how buildings can be utilized at peak efficiency. For example, if a building is unoccupied, the HVAC system is scheduled on and the lighting is left on, we cannot observe the interoperation of systems without sharing information. The result is wasted energy and no information to provide management insight.

Systems: BMS systems are not always on the lookout for problems or inefficient operation. When control problems begin to appear they often manifest as poor energy performance. Troubleshooting is made more difficult when the data lacks context. For example, “Chilled water pump mismatch alarm” or “Chilled water pump increased energy consumption alarm” from siloed systems is not contextual or useful.

All too often BMS systems with frequent alarms become noise generators. With increased frequency of alarm conditions, technicians are often prone to use manual intervention to remediate symptoms rather than the root cause. Symptom remediation and manual intervention inevitably have a compounding effect over time and cause poor performance. Alarms that lack context exacerbate an already difficult situation for building managers as they are not sure which contractor to call for resolution.

The effect of poor visibility and siloed systems can manifest in a number of ways. Each is challenging the buildings economics, and could include but not limited to:

To improve building performance, the connected systems need to be dynamic, provide visibility and context in order to drive performance forward. It could be said that operating a building is analogous to driving a car. If the driver has visibility of the road, feedback from gauges and a steering wheel, they will be in full control. Take away the driver’s road visibility or feedback from gauges; they will crash or run out of fuel. Remove the drivers steering wheel, and inevitably the car will crash on the first corner.

Why would anyone attempt to operate a building with a BMS system (steering wheel), without an integrated EMS (road visibility and gauges)?

This would be just like driving a car blindfolded…

Solution: In a building environment we need to make sure that our steering wheel, road visibility, and gauges can communicate with each other. Combining both EMS and BMS into the one platform breaks down barriers between previously siloed systems. Sharing data removes the blindfold and creates visibility and context, enabling a continuous feedback loop for building operators not previously possible.

This new-found visibility and context turn what was once darkness and noise, into easily digestible and manageable chunks of actionable information.

Now an automation problem manifesting as poor energy performance has been made visible, has context, and is now actionable in real time. The operator is now empowered and can quickly self-remedy or call the correct contractor to resolve the issue saving energy and hours of wasted investigation time. With this approach, we have now replaced performance degradation with a more productive operator who is in control and driving increasing building performance.

With visibility and control combined, improving building performance is like pulling a car out of stop/start traffic onto the open highway. As the car comes up to a constant speed, fuel consumption improves, and there is less wear and tear on brakes and tires. Similarly, improving building performance is like breaking away from a stop/start unstable environment towards harmonious stability. As the building becomes more stable at a constant speed, only minor corrections from the operator are required. Downtime, energy costs, and operating costs begin to decrease as a result of more stable operations. Furthermore, reduced wear and tear on plant equipment increases usable life cycle and decreases capital expenditure on replacement plant equipment.

With this in mind, it can be said that the whole of energy and building automation is greater than the sum of both parts, making a strong case for the economics of a combined solution.

It is worth noting that taking a combined approach has another indirect benefit for both building owners and contractors. The building owner receives the benefits of a cheaper bundled solution through shared delivery resources. There becomes one contractor and one source of truth for the delivery of a combined EMS and BMS solution giving the owner a means to hold the contractor accountable for the delivery of a poor performing building.

For contractors, taking on more scope enables them to move up the ‘value chain,’ win more work directly with the building owners and ultimately, grow their businesses. To make this strategy work, there needs to be a way for contractors to easily take more scope and deliver it in-house at a lower price than competitors. Consolidating EMS and BMS tools into a single platform helps streamline project delivery and enables contractors to deliver an integrated high performing building to the end user.

Here’s how Optergy do it: Optergy is a technology company dedicated to improving the business of managing facilities and providing tools to improve efficiency, performance, and processes. From the simplest building to the largest enterprise, Optergy provide the steering wheel, visibility and gauges required to enable everyday building operators to drive high-performance buildings.

Optergy is a provider of brand agnostic software that can be installed in a new building or can coexist with legacy building systems including TRIDIUM, Honeywell, Alerton, Siemens, Delta, Trend, TRANE, Automated Logic, DEOS, Reliable, Schneider, Airtek, KMC, Beckhoff, ABB, Danfoss and most electricity, gas, water and thermal energy meter types available on the market.

The software is multi-vendor with a global partner network, has no subscription fees and free software updates with feature additions and improvements. Visit us now at http://optergy.com.

Top Ryde City is a retail shopping center in Sydney Australia. It was originally built in 1957 and was the second open air shopping center in Australia. Showing its age, the center underwent an $800m redevelopment and was reopened by the Prime Minister in November 2009. Due to weak consumer spending and the building’s poor performance causing high costs for tenants, many tenants chose to leave the center.
Subsequently, only 12 months after re-opening the previous owner was forced to sell the newly redeveloped shopping center for $341m ($459m loss) to the international property group Blackstone. Blackstone specializes in buying quality investments at discounts to replacement costs then improve the properties through hands-on management and targeted value-add initiatives.

Poor performance was identified as a significant cause of high operating expenses. This highlighted the need to tune up the BMS system and significantly reduce the amount of money spent on energy and maintenance. To enable building tuning and a constant feedback loop for building operators, over 160 sub-meters were connected to the building’s automation system. In this building the automation system controls over 70% of the energy loads, making it the most logical place to provide the operators visibility and gauges to put them firmly in the driver’s seat.

Combining both the EMS and BMS has enabled the operations and maintenance team to tune up the building and implement clever occupancy based strategies in conjunction with energy demand management.

Since implementation, through continuous feedback and tuning the center has seen direct benefits including a cumulative reduction of 4,296 MWh (12.91%) resulting in over $2.2 million of energy savings from the 2014 baseline. A staggering result delivered by an amazing team equipped with the right tools.

According to advisory firm McgrathNicol, annual net operating income increased from $18 million to $24 million over an 18-month period due to the attraction of premium tenants and increased asset performance. Blackstone now have their Australian portfolio for sale and expecting record profits.

Conclusion: Control Solutions, Inc It is essential to make sure the steering wheel, road visibility, and gauges can communicate with each other in the built environment. Combining both EMS and BMS into the one platform breaks down barriers between previously siloed systems. Sharing data removes the blindfold and creates visibility and context enabling a continuous feedback loop for building operators not previously possible.

Automation problems manifesting as poor energy performance can be made visible, be given context and are made actionable in real time. Empowering building operators to quickly self-remedy or call the correct contractor to resolve an issue, saves energy and hours of wasted investigation time. This approach replaces performance degradation with a more productive operator who is in control and driving increasing building performance.

This combined approach provides a lower total installed cost and enables building owners to hold the contractor responsible for the delivery of a poor performing building.

The whole of energy and building automation is greater than the sum of both parts.