What Makes a Company Great? It starts with their Philosophy 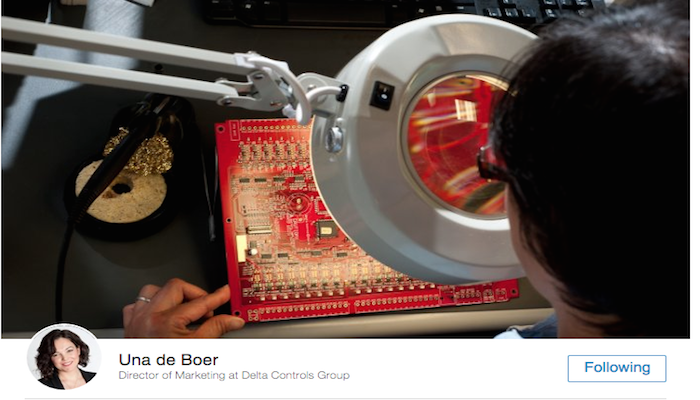 As we prepare for the nomination period for the 2015 ControlTrends Awards, I am reminded of how many great people, products and companies we have in our industry. It made me wonder what is at the core of these amazing players that make up the Building Automation Controls and HVAC Group.

I came across this video and post from Una de Boer, the director of marketing at Delta Controls. Una is one of the bright, hardworking, thoughtful people in our Industry and does a wonderful job of answering my question. So, with her permission, please check out the following video and Una’s words from one of her LinkedIn posts.

No one wakes up in the morning thinking, let me do a bad job.

One of the most important lessons I’ve learned in the last few years is that if you create an environment where people have the opportunity to do it right, we will. We will also be sticklers for detail, insist on creating the very best product available (rather than the minimum viable one), revise a brochure no fewer than 19 times, argue with each other vehemently at product management meetings (and then adjourn for a friendly group lunch). We will have really strong feelings about recycling and intense debates about whether or not our company should mail hard-copy Christmas cards (nope, not worth the negative environmental impact). We’ll organize the rescue of feral kittens from the abandoned lot next door, stay with the company forever, and take it really hard when things go wrong – even 22 years later.

One of my colleagues, Michelle, has worked at Delta Controls for 22 years. She started out in the production line and back in the day, the control boards were stamped and hand-signed by the assembler. Now Michelle works in Quality and Repair. Last year, a board came to her with a problem; a 20 year old board. That in itself was unusual: our industry has a life expectancy of approximately 10 years, and technology races forward at lightning speeds, so rather than sending a controller back for repair after 20 years, most building managers would probably just get a new one. In a way, this unusual occurrence was a high-quality problem, one we could even be proud of: our boards outlive the industry life expectancy…by a lot.

Michelle, however, was less than impressed. The board had her initials on it. As luck would have it, we were conducting a factory tour with some guests, so she had an audience and had to explain to them what she was working on. “I guess I didn’t do a good job on this one,” she said, about the control board she built 20 years ago that failed only after doubling its life expectancy. It’s like a 140 year old woman getting a cold, needing to see a doctor, and then saying “I guess I’m not as healthy as I thought.”

Michelle fixed the board and the owner is getting a few more years of productive use out of it. Plus all of us got some mileage out the story, too. You’ll hear us talk about Michelle’s board – and her disappointment in it – in the lunch room, in meetings, in presentations. We marvel at how hard one of our colleagues took it when something went wrong, two and a half decades later. We respect her unrelentingly high standards and we hold her up as a role model.

Doing it right is more than an opportunity: it’s a mandate and it will change the way you work. It will create a culture of excellence and all the irritations that come with it. Because when people care, there will be debate. There will be high standards – personally and professionally. There will be friction. There will be fractious meetings. There will be disappointments (just ask Michelle). But there will be good design, products that last (almost) forever, and pride.

It’s a good thing to get up in the morning knowing you’re going to do a great job.

Eric has been in the controls industry since 1979. His passion for controls and the desire to provide an easy way for HVAC professionals to keep up with the rapid changes in controls technology inspired him to create Controltrends.
All Posts »
PrevPrevious“30 Minutes with Lynxspring” Webinar Series – August 19, 2015
NextTop US Cities With Exposed Niagara SystemsNext