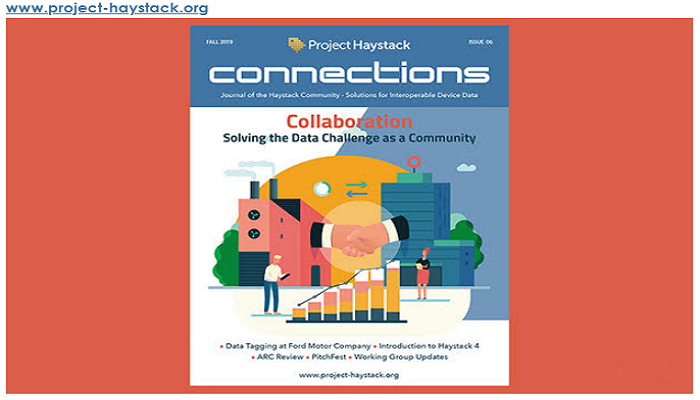 The Project Haystack Organization (https://www.project-haystack.org), a collaborative community addressing the challenge of utilizing semantic modeling and tagging to streamline the interchange of data among different systems, devices, equipment and software applications, today announced the publication of their sixth issue of Haystack Connections Magazine.

The Connections Magazine Fall 2019 issue reports on the latest news from the Project Haystack community from around the world and documents how rapidly the data revolution is overtaking the built environment. Both IT and OT contingents are recognizing that sematic data modeling and metadata tagging is key to clearing the hurdles related to ease-of-use, unified data flow, edge-to-cloud, and data security. Not to be missed is the fact that the storytellers in this issue include the end users of the data generated by equipment systems including commissioning experts, smart building consultants, large-portfolio property managers and developers – all of whom are demanding smarter, interoperable solutions, and companies that are responding by providing Haystack-compatible products and solutions.

“Project-Haystack has brought two important things to the industry – one is the technology – the semantic modeling methodology and standard tagging libraries. The other is a community-driven, open-source process that has engaged companies that, even as they compete in day to day business, realize that making data easier to work with will bring benefits for all,” said John Petze, Executive Director of the Project Haystack Organization.

With the announcement of Haystack 4, it was decided that it was time to update the organizations “Tag Logo”. Along with this, Project Haystack launched a new Marketing website to compliment the Developer website. Now, the Developer website is focused solely on the continued development of the Haystack methodology and assignment of tags, the activities of the Working Groups and the developer Forum conversations. The Marketing site is designed to inform the community on all the who is where and when, the new Project Haystack Logo files and new Marketing Kit, press releases, our members list and how to become a member, and is the home to Connections Magazine.

This issue of Connections Magazine promotes Project Haystack involvement in upcoming events and recaps past events including Project Haystack exhibiting at ISH in Frankfurt, Germany and in May, the organizations biggest collaborative event, the 2019 Haystack Connect Conference, which brought this community together for three days in San Diego. The Haystack Connect 2019 Speaker Presentations are available at https://www.haystackconnect.org/schedule. In September, a one day, first-ever Project Haystack event was held in London and sponsored by J2 Innovations.

Project Haystack Working Groups provide updates to their work. The Working Group Cybersecurity, championed by Fred Gordy of Intelligent Buildings and ATES Systems, championed by Jaap Balvers of BAM Energy Systems, part of Royal BAM Group nv, are just getting started and looking for “Collaborators” to join their group. As always, there is a section dedicated to Tools for Developers and Integrators and How to Get Involved, a curation of social media about Projects, Practices and Products, and a Project Haystack Members Directory.

“Today’s built environment comprises rich streams of data. Capturing and properly harnessing it allows owners and operators to better manage and operate their facilities. Data does not come from a single, unified source. Data’s value originates from just about anywhere. It must be organized, facilitated and orchestrated to capitalize on its value,” added Marc Petock, Executive Secretary of the Project Haystack Organization. “This is the essence of Project Haystack and the collaborative efforts of its community.”

Adoption of Project Haystack is at an all-time high. It is being utilized in a wide variety of applications and use cases, and being deployed in thousands of buildings incorporating millions of square feet globally.

The Project Haystack Connections Magazine Fall 2019 issue is available for download at https://marketing.project-haystack.org/project-haystack-media/connections-magazine.

About Project Haystack
Since its formation in March of 2011, the Project Haystack Organization (a 501(c) non-profit trade association) has been providing the industry with an open-source, collaborative environment to address the challenge of making data self-describing using semantic modeling, also known as data tagging. The work developed by the Project Haystack member companies and community streamlines the process of managing, presenting and analyzing the vast amount of data produced by smart devices and equipment systems. The Haystack methodology can be used with virtually any type of system and device data and is not tied to any vendor or communication protocol.

Check out these documents and audio resources to quickly come up to speed on Project Haystack tagging benefits and the methodology. 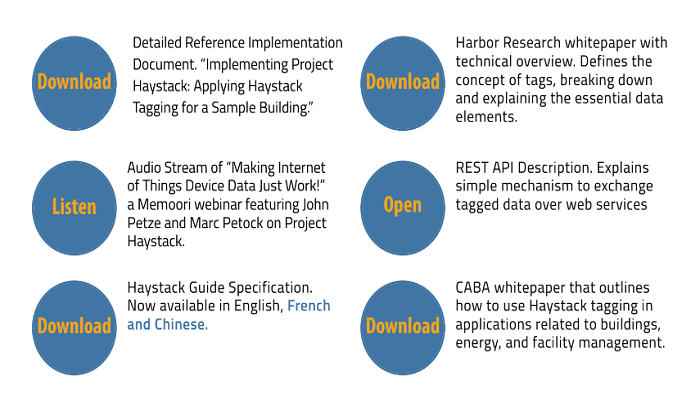