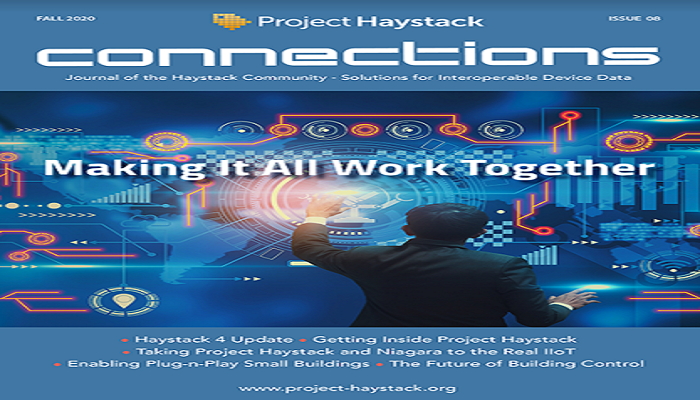 RICHMOND, VIRGINIA – December 15, 2020 – The Project Haystack Organization (www.project-haystack.org), a collaborative community addressing the challenge of utilizing semantic modeling and tagging to streamline the interchange of data among different systems, devices, equipment and software applications, today announced the publication of the eighth issue of their Connections Magazine.

The Project Haystack Connections Magazine Fall 2020 issue demonstrates how the Haystack Community has continued to further solidify the value brought by its widely adopted open-source methodology for semantic tagging in the built environment. Facility owners, operators, managers and service companies recognize that a standardized approach to semantic data modeling is key to overcoming the hurdles related to effectively using the data produced by the built environment.

Project Haystack has continued expanding the standards for semantic modeling methodology and building on the tagging libraries for more and more applications. This community-driven, open-source process is engaging companies that work on different facets of specifying and implementation. They understand the importance of “Making It All Work Together.”

“Project Haystack has continued to extend the widely accepted standard for semantic modeling with richer tag libraries, taxonomies and ontologies to support its continued adoption worldwide. This community-driven, open-source initiative will celebrate its 10th anniversary in 2021 and continues to grow through the work of the community of systems integrators, engineers and service organizations that are on the front lines of making smart buildings a reality.” said John Petze, Executive Director of the Project Haystack Organization.

The Connections Magazine Fall 2020 issue consists of articles, conversations and updates from Project Haystack members and supporting companies. They include a conversation between Lewis Martin of CM Industrial and Project Haystack Executive Director John Petze, “The Role of Open Source – Getting Inside Project Haystack”. Richard McElhinney, Chief Software Architect at Conserve It, contributed an article on “Taking Project Haystack and Niagara to the Real IIoT”. “The Haystack Byte Journey Continues” is an article written by Alper Üzmezler, Managing Partner of BAS Services & Graphics. Paul Ehrlich, P.E., Founder and President of Building Intelligence Group LLC, collaborated with Veronica Adetola and Draguna Vrabie of the Pacific Northwest National Laboratory (PNNL) on two articles, “The Future of Building Control – Rule-based or Predictive?” and “Co-Design a New Process to Improve Control System Design and Delivery,”  both highlighting the importance of tagging to achieve the goals of advanced control. “Enabling Plug-n-Play Small Buildings Using Haystack Tagging” was contributed by Scott Muench, Vice President of Customer Experience at J2 Innovations. Rob Glance, Vice President Information Technology of BuildingFit contributed the article “Finding Our Way: Take the Established Success Path for Implementing Building Analytics”. Jean-Simon Venne, CTO of BrainBox AI, contributed his article “Resolving Pain Points in Tagging Via the Use of Artificial Intelligence.”

Brian Frank, Technical Lead of Project Haystack, provided an update on Haystack 4. The Project Haystack website, www.project-haystack.org, is being transitioned to the new Developer website, www.project-haystack.dev, to focus on the new Haystack 4 methodology and assignment of tags. The activities of the Working Groups and the developer Forum conversations will be transitioned to  the Developer site soon, as well.

Project Haystack announced under Events, to SAVE THE DATE for the highly anticipated Haystack Connect 2021. It will be a virtual conference held May 4 – 6, 2021. Project Haystack Working Groups contributed updates to their work, there are sections dedicated to Tools for Developers and Integrators, information on How to Get Involved, a curation of social media highlighting Project Haystack Members new Projects, Practices and Products, and their Members Directory.

“Having access to data is not the same as controlling it and making meaningful use of it,” said Marc Petock, Executive Secretary of the Project Haystack Organization. “Knowing which data to collect, giving it uniformity and common context and how to standardize it to unlock the data’s true value is the key. This is where Project Haystack comes in with its flexible, widely adopted data-tagging methodology.”

Building systems is where the Project Haystack tagging methodology gained traction and adoption, but the Haystack methodology is not just about HVAC, temperature sensors, fans, and meters. The IoT, BIoT and the IIoT are bringing diverse smart devices into high-rise commercial buildings, industrial facilities, universities, homes, factories and agriculture. The Project Haystack tagging methodology is now being deployed in thousands of buildings incorporating millions of square feet globally.

Since its formation in March of 2011, the Project Haystack Organization, a 501(c) non-profit trade association, has been providing the industry with an open-source, collaborative environment to address the challenge of making data self-describing using semantic modeling, also known as data tagging. The work developed by the Project Haystack member companies and community streamlines the process of managing, presenting and analyzing the vast amount of data produced by smart devices and equipment systems. The Haystack methodology can be used with virtually any type of system and device data and is not tied to any vendor or communication protocol.

More information about the Project Haystack Organization and membership is available at: marketing.project-haystack.org. For Developers, the Discussion Forums and Working Groups can be found at: project haystack.org/forum/topic. The Haystack 4 Developers site is being transitioned to project-haystack.dev.

Co-Founder and Co-Chairman of the CTA Awards. HVAC and Security Sales Engineer and Integration Consultant with over thirty years of industry experience.
All Posts »
PrevPreviousEpisode 386 ControlTalk NOW examines the Trends of 2020 with Industry Expert, Marc Petock
NextSeasons Greetings to our ControlTrends Community!Next