As many of you know G & O Thermal Supply the master HVAC controls distributor out of Chicago offered strong evidence that the second secret handshake originated in Chicago. New evidence summited by the HVAC and boiler controls supplier that Pittsburgh relies on for Johnson, Honeywell, and Belimo controls the Edward C Smyers Company suggests that the second secret handshake in fact originated with relatives of the Smyers that dates
back to George Washington Smyers this countries first Heating controls distributor. It is common knowledge that the Edward Smyers Company is the oldest and most reliable HVAc controls distributor in Pittsburgh but did this second handshake originate in Pittsburgh or with G & O Thermal Supply in Chicago. I will let you be the judge. 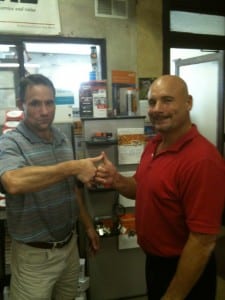 “We often reflect upon our company origins in the earliest days of producing Pittsburgh Steel, when the giants of automatic controls and instrumentation were born, when Honeywell, Barber-Colman, Johnson Controls, and the other control manufacturers first began regulating water and steam, controlling temperatures, pressures, and humidity, and when Fireye and Honeywell Flame Safeguard Controls were first applied to their respective markets, and the simple but reliable and flourishing methods that first anchored our business began. We welcomed the electromechanical, solid state, direct digital controls (DDC), and Enterprise Automation technologies that would sustain our business for more three generations and beyond, by allowing us to continue providing outstanding customer service, technical support, while offering an incomparable local inventory, augmented by our membership in CGNA.

There is always a history to consider. Long before Federal Express and UPS NDA, there were many reliable and expedient ways to move commerce and services north and south, east and west, and to all points in between. Horses, wagon trains, railroads, bus lines, and personal carriers and trusted agents, all brought valuable goods to those in contract and concert with one another, and always, accommodated by a secret and common denominator: a secret handshake.

As young wholesalers and distributors, the Smyers family learned the secret handshake was borne of purpose. It served as a sign, counter-sign, a means to cross boundaries safely, and was proof-positive that the conveyor was a “person in the know.” Upon the execution of the secret handshake, any and all the entitlements, trusts, benefits, and discounts shared by gentlemen in the know, were to be rendered without reservation. The conveyor was to be considered to be a fellow business partner, competent and familiar with the honorable trades and bonds made between men, and of course, women, for the purposes of commerce.

The origin of our family’s secret handshake was traced back to a Smyers relative, who as a frontiersman in the year 1754, swore his honorable allegiance and service to a young Lt. Colonel George Washington, on assignment for the Governor of Virginia, Robert Dinwiddie, who had sent the future first president of the United States to Pittsburgh with regimental papers and orders to occupy, fortify, and defend the Upper Ohio Valley, against a French army advancing southward from Canada.

In a quiet ceremony that belied the grave events to come, in the presence of both Iroquois and Shawnee Chieftains, the young Washington passed the secret handshake to the Smyers family at the confluence of the Monongahela, Allegheny, and Ohio rivers, beneath the great interior height, that would later be named Mount Washington, in tribute to Washington’s heroic deeds. In time, Fort Pitt would be built on the historic grounds that would soon outlast its purpose, and give way to the Point State Park, and the Three Rivers would become the City of Champions, home to the Pittsburgh Steelers, Penguins, and Pirates.

The secret handshake still serves us well in many of our business matters and in defending our territories against the more modern invaders.”

I leave it to you our readers to decide: G & O Thermal Supply out of Chicago or the Edward C Smyers Company out of Pittsburgh. The nod goes to the company with the most comments.

Stay tuned as the third secret handshake will be revealed later this week at Controltrends.com

Eric has been in the controls industry since 1979. His passion for controls and the desire to provide an easy way for HVAC professionals to keep up with the rapid changes in controls technology inspired him to create Controltrends.
All Posts »
PrevPreviousRebuilt Flame Safeguard Controls : Do you really want to be involved in a law suit?
NextHoneywell Announces Stromquist & Company Diamond Distributor AwardNext