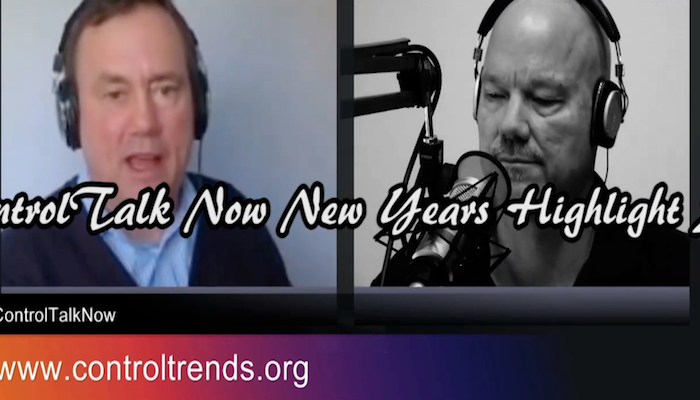 ControlTalk NOW thanks the entire ControlTrends Community for its daily quest into the people, products, and events that shape and define our industry. Your viewership and participation makes all of our efforts worthwhile and meaningful. The HVAC stage was set daily with news of acquisitions, new products, big data developments, data visualization, smart grid updates, industry events, Open ADR, training opportunities, IT security, the latest disruptive technology, cyber threats, exciting and important breakthrough solutions, technology, and most importantly, people.

We hope you enjoy this short review of 2013! And remember that one of the most ambitious and important ControlTrends initiatives is to capture the people, products, and solutions in a more legacy-oriented medium that will serve as an archival repository for the HVAC Industry both now and in the future. We look forward to greater things in 2014.

The Inaugural 2012 ControlTrends Awards benchmarked a new dimension of insight, recognition, and prestige given to the superstars and heroes of our HVAC Controls, and Building Automation industries. The event honored some of the best minds, products, and solutions in an entertaining and rewarding occasion, featuring the first Hall of Fame Inductee, Werner Buck, and Petock Award recipient Marc Petock.

Social Media in the HVAC Industry: ControlTrends began a four part Google Hangout Series with an introductory interview with Mitch Joel, a social media king whose company, Twist Image, helps large corporations create and sustain a social media marketing strategy. Mitch’s bottom line: “Like it or not social media is here to stay, and it is taking hold in the HVAC industry.”

ControlTrends Google Handouts featured social media experts like Anthony Bronzo, the founder of ControlPal.com and Seãn Johnson from Stromquist & Company. Additional guests included Chad Schwenn, Director of Marketing at ACI and CGNA’s Director of Marketing, Nhadira Johnson, Judi Knight of New Tricks, Abel B Ramirez of The ControlsFreak, and George Hawkinson, Vice President of Marketing, Lynxspring. All of these experts shared an amazing amount of knowledge and personal experience concerning the importance and impact of social media in their respective businesses.

Smart Grid and OpenADR were two ControlTalk NOW trends that took off from neighboring launch pads rapidly accelerating towards the same target: the electrical grid of our 20th century existence, essential to modern life, must become more integrated into our daily lives.

Smart Grid is in short, the digital technology that allows for two-way communication between the utility and its customers, and the sensing along the transmission lines is what makes the grid smart. Like the Internet, the Smart Grid will consist of controls, computers, automation, and new technologies and equipment working together, but in this case, these technologies will work with the electrical grid to respond digitally to our quickly changing electric demand.

Open Automated Demand Response (OpenADR) is an open and standardized way for electricity providers and system operators to communicate DR signals with each other and with their customers using a common language over any existing IP-based communications network, such as the Internet. As the most comprehensive standard for Automated Demand Response, OpenADR has achieved widespread support throughout the industry.

The combined importance and potential of Open ADR and the Smart Grid warrant a full-fledged effort to get some early share of the market. The global smart grid market projections for 2020 are over $400 billion! Inattention to these imperatives will carry costly future catch-up investments and expenditures (buy-outs) by the biggies.

The Race to the Small Space refers to the significant number of manufacturers and products that have elevatored up or down a few floors, acquired, retooled, and/or added features to their existing product portfolios to compete in the largest and most lucrative of all markets: the small space, by which we are referring to light commercial retail buildings, chain stores, fast food stores, all the way down to the individual residence, hence the Race to the Small Space.

Thermostat Wars was one of the topics that sustained the greatest interest throughout 2013, as the intelligent thermostat presents itself as one of the most important, ever-emerging, and competitive open markets; yet, because it involves equipment, the thermostat will forever remain part of the HVAC industry’s equipment and service domains.

Conversely, The Race in the Big Space has called for the role of the Master Systems Integrator or MSI, with its on-going Big Data Bonanza and the strides made in Data Visualization and Dashboards.

IT Security and Cyber Threats: The HVAC Industry witnessed the swift reaction by all manufacturers and solution providers to the eminent threats involving Cyber Terrorism and the reality that the HVAC Industry may be particularly vulnerable to these attacks. We know that Cyber threats are an issue for every building, large or small because they often have fewer preventative or responsive resources. ControlTrends reached out to industry experts like Marc Petock and George Hawkinson to learn about the CyberPro, which was specifically designed for our Industry, along with Contemporary Controls’ George Thomas for additional products and solutions for network security.

We close the year 2013 with an invitation to join us at the 2013 ControlTrends Awards Show, this coming January 21, 2014, at the BB Kings Blues Club and Grille. Contact your participating sponsor for tickets or stay-tuned to ControlTrends for single ticket information.

<ahref=”http://traffic.libsyn.com/hvaccontroltalk/68_Episode_68__ControlTalk_Now__HVAC_and_Building_Automation_Control_News_You_Can_Use.mp3″ target=”_blank”>Click here to listen to or download the Podcast version of ControlTalk Now.