Since the 1970’s with the introduction of “Energy Conservation” steam traps have been elevated in prominence as a good way to conserve energy in steam systems.

So what is a steam trap and how does it work?

Basically a steam trap is a HOLE. In the early days of steam systems a maintenance worker would every once in a while open a valve up to allow the condensate (water resulting from steam giving up its latent heat) to flow out of the piping system. Since steam will not penetrate water, if the water/condensate was allowed to build up in the piping system the water/condensate would cool the entire system down effectively shutting the steam systems heating abilities down.

Steam traps come in a variety of configurations today but in reality the basic functions of a steam trap over the years have not changed. The steam trap has three (3) main functions: Allow condensate to flow to a collection system: vent air and other gases to maintain steam temperature and reduce corrosion: prevent the escape of system steam. A steam trap must be able to distinguish steam from condensate and non-condensable gases, discharge the condensate, and close to prevent the loss of steam. Steam traps are divided into four types based on how they distinguish  steam from condensate. The float type trap will sense the density difference between steam and condensate, the thermostatic trap will sense the temperature drop between the condensate out of contact with the steam and the steam itself, the thermodynamic trap will sense the difference in velocity and therefore static pressure between water and flow through a restriction, and the fixed orifice trap does its job by allowing more water to discharge than steam.

The most common steam traps on today’s market are the Float and Thermostatic steam trap and the Inverted Bucket steam trap. 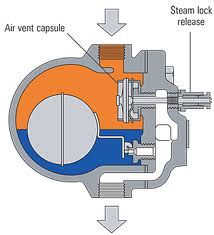 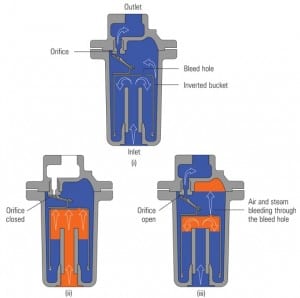 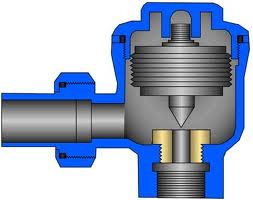 Thermostatic Steam traps by nature open and closes by means of a force developed by a temperature sensitive actuator. These actuators are usually bimetallic elements designed to “warp” open or closed based on usually a 180 degree temperature which would be below the saturation point of the steam. As the temperature drops within the steam trap the bimetallic actuator “warps” causing the outlet valve of the trap to open and remove the condensate. As the condensate is removed the incoming hot steam causes the actuator to “warp” back to a closed position. 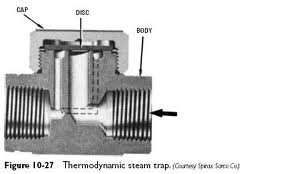 These are the major player in the steam trap world. There are other types not covered in this article such as the Ball Float trap (works like a ball floating in your bathroom tub) as the condensate level drops so does the ball until it closes the “drain” off and the fixed orifice trap which brings us back to the “HOLE”.

Needless to say the without “working” steam traps a steam system can be a major energy hog causing extremely high costs to your steam plant along with loss in production efficiency. Check the steam traps regularly for proper function. Always check with a knowledgeable person for you steam trap needs as they should be qualified to make proper decisions not only on the sizing of a steam trap but the best type of trap for your needs.