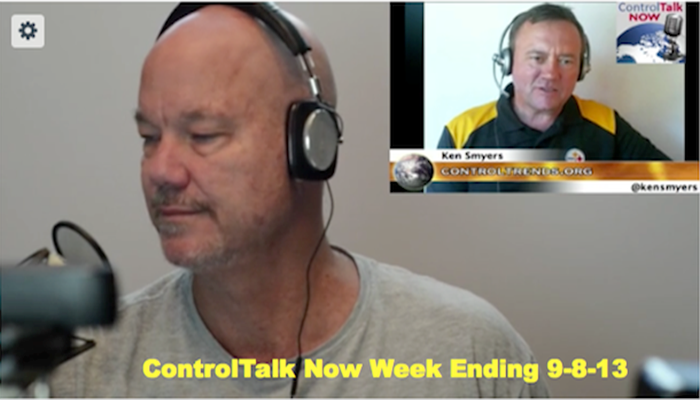 ControlTalk NOW thanks Project Haystack this week’s sponsor. Project Haystack is an open source initiative to develop tagging conventions and taxonomies for building equipment and operational data. We define standardized data models for sites, equipment, and points related to energy, HVAC, lighting, and other environmental systems. A simple REST API is defined to facilitate exchange of Haystack data over HTTP.


Register Today to see Honeywell WEBs-AX Security at ASIS 2013! Visit Honeywell at ASIS 2013 — The world’s most influential security event is coming to Chicago, September 24-27 – and Honeywell is proud to be exhibiting! Visit the ASIS website and get in the game!

See How to Install The Negative ION Generator made by Advance Control Technologies: The negative ION generator is made by Advance Control Technologies and installed by Stromquist & Company’s Dozier Mills on a residential split unit. Negative ION generators can purify indoor air. Dust, pollen, animal dander, mold spores and bacteria are neutralized electrically when your fan is running. This helps keep your environment clean and healthy.

ABB Positions World’s Most Powerful Offshore Wind Connector in the North Sea. ABB, the leading power and automation technology group, has installed the world’s highest-voltage offshore converter station in the North Sea. Alternating current electricity generated in three wind farms off the coast of Germany will be converted on the platform into high-voltage direct current (HVDC) for transmission to the mainland.

Ken’s TOP 5 Information Pivot Points of Week 35: 1. How Secure is your SCADA System? – Register now for President & CEO – GlobaLogixCyber Charles Drobny’s workshop. Security Strategies for SCADA. The US DHS states that 40 percent of all hacking attacks last year targeted the Energy Sector. Recent news has highlighted the vulnerability of the US Oil & Gas infrastructure to cyber attacks. In September of 2012 one of the major SCADA software providers had their network hacked by the Chinese.

Eric’s Favorite Video of the Week — Joshua Foer: Feats of Memory Anyone Can Do: There are people who can quickly memorize lists of thousands of numbers, the order of all the cards in a deck (or ten!), and much more. Science writer Joshua Foer describes the technique — called the memory palace — and shows off its most remarkable feature: anyone can learn how to use it, including him.

ControlTalk Now for Week Ending September 1, 2013: The History of Labor Day: ControlTrends NOW is on the road and enjoying the Labor Day Holiday with friends and family. We wish you and your loved ones a great holiday! ControlTalk Now will resume its regular program September 8, 2013.

ControlTrends Hangout: Episode Four — Using Social Media in the HVAC Industry: ControlTrends Hangout guests included Judi Knight of New Tricks, Abel B Ramirez of The ControlsFreak, and George Hawkinson, Vice President of Marketing, Lynxspring. Judi Knight creator of New Tricks shares her knowledge and experience concerning the importance of social media, in particular the use of WordPress and the basics of Website Design. New Tricks provides WordPress web design services that may include consultation on your business concept, building a site, all the way through Social Media strategy and SEO.

Selling Building Automation Control Systems: How to Have Decision Makers Want to See You! We have talked about him on ControlTalk, and how he is quite possibly the most relevant person on the planet when it comes to selling building automation controls and energy solutions. He is a featured part of the Honeywell EEO program. He is the dynamic Mark Jewell, founder of The Efficiency Sales Professional Institute, and here is the first of hopefully many contributions Mark has for the ControlTrends Community.

Haystack Webinar Planned for Tuesday, November 12, 2013 – Call for Speakers: Haystack message from Heather Deal: Hello and welcome back from summer! As part of our ongoing effort to promote Haystack a number of supporters are coming together to produce our first webinar. The webinar will be presented at 11AM ET, on Tue Nov 12, 2013. John Petze has volunteered to moderate and we are now looking for 3-4 speakers to provide presentations.

Stromquist & Company Introduces ControlBid: An Auction Site Just For Controls. If you are like most of us in the controls industry, you either have inventory that is old, obsolete or you ordered more controls than you needed and now they sit on your shelves collecting dust. Stromquist & Company created ControlBid.com as a place you can easily post and sell these items.Think of Ebay, but just for Hvac and building automation controls; less expensive and without the hassle of listing fees.

Eric has been in the controls industry since 1979. His passion for controls and the desire to provide an easy way for HVAC professionals to keep up with the rapid changes in controls technology inspired him to create Controltrends.
All Posts »
PrevPreviousCrazy Fall Variable Frequency Drive Promotion For Stromquist Customers
Next(Ah Oh, Clint) Secured Cities: Get up Close and Personal with CitiWatchNext