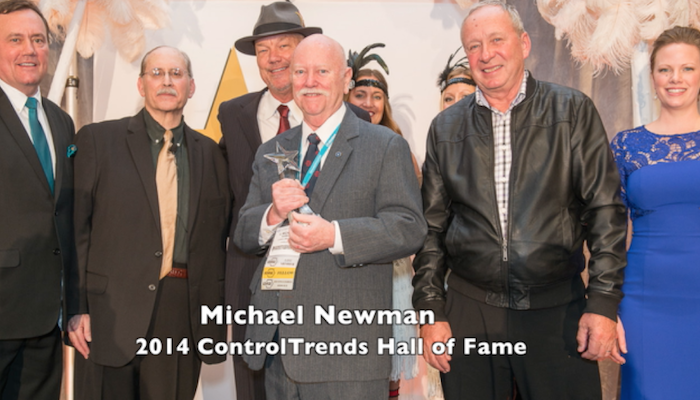 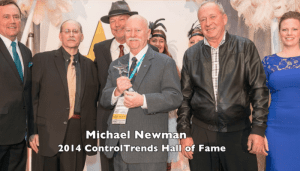 The 2014 ControlTrends Awards had the special pleasure of having Automated Buildings’ editor and owner, Ken Sinclair, induct H. Michael Newman, also known as the Father of BACnet, into the ControlTrends Hall of Fame. Mike has been a member of the Association of Energy Engineers, the Cornell Society of Engineers, the Institute of Electrical and Electronics Engineers, and is a senior member of the Instrumentation, Systems, and Automation Society. H. Michael Newman recently authored Direct Digital Control of Building Systems: Theory and Practice. For more on H. Michael Newman’s outstanding life achievements and biography, please see below.

As a Fellow and Life Member of the American Society of Heating, Refrigerating and Air-Conditioning Engineers, Mike has served on the Research and Technical Committee that supervised the Society’s research program and its technical committees; was an officer of TC 1.4, the technical committee on control theory and application; was the chairman of Standard Project Committee 135P which developed the BACnet® building automation and control network communication protocol and was chairman of the follow-on standing standard project committee, SSPC 135, responsible for interpreting and extending BACnet, up until July 2000.

Mike graduated “with distinction” from Cornell University in 1965 with a bachelor’s degree in Engineering Physics. A year later he was awarded a master’s degree in the same field and subsequently did post-graduate work in astrophysics at the NASA Center for Radiophysics and Space Research. Following 10 years as a pilot and flight instructor, during which he assisted in the design and maintenance of aircraft electronics installations, Mike returned to Cornell to take charge of the installation and development of the University’s computerized energy management and control system. The system now serves over 225 buildings with nearly 980,000 sensor and control points, features extensive graphic display and plotting capabilities, and was one of the first such systems to make use of multiuser, multiprotocol computers in an integrated, multivendor field panel environment. Mike is presently Manager of the Building Automation and Control Systems Integration group within Facilities Services at Cornell University.

In June of 2003 he received ASHRAE’s Standards Achievement Award and in 2010 its Distinguished Service Award. He has served as convener of the committee’s XML Working Group that published the BACnet Web Services addendum, BACnet/WS, and is presently the convener of the Elevator – Working Group. He has been a member of the Board of Directors of BACnet International, the successor group to the BACnet Manufacturers’ Association, the Chairman of the ASHRAE Standards Committee, which oversees all of ASHRAE’s standards work, and a member of Technology Council. He has contributed to the development of the Professional Development Seminar on “Automatic Temperature Control,” and served as a speaker for the PDS on “DDC for HVAC Monitoring and Control” for 12 years. He has contributed to several revisions of the ASHRAE handbook chapter on “Automatic Control.” In 1999 he co-authored the “GSA Guide to Specifying Interoperable Building Automation and Control Systems Using ANSI/ASHRAE Standard 135-1995, BACnet” that was published by the National Institute of Standards and Technology (NIST) and is still used throughout the federal government. He is the author of an award-winning book from Wiley Interscience entitled “Direct Digital Control of Building Systems – Theory and Practice” and his second book, “BACnet – The Global Standard for Building Automation and Control Networks,” was published by Momentum Press in August 2013.

Mike has served as a consultant to the Architect of the Capitol, the National Institute of Building Sciences, and NIST in Washington, DC, as well as to several private companies. He was a member of the United States delegation to the International Energy Agency’s Advisory Review Board on the subject of the use of microelectronic control systems for energy conservation in buildings. He has served as a U.S. expert to the International Organization for Standardization’s ISO/TC 205, Building Environment Design, at meetings throughout the world and is currently Chairman of the U.S. Technical Advisory Group and the U.S. Head of Delegation. In the 1990’s, he was a presenter at the “Forum Home and Building Automation” in Paris; participated in the formation of the BACnet Interest Group – Europe in Frankfurt; and was the keynote speaker at a BACnet seminar in Sydney, Australia. At the Congress Building Performance in 2000, again in Frankfurt, he presented a paper entitled “BACnet – Past, Present and Future.” In 2001 he was a member of a 3-person delegation to Beijing and Wuhan, China, that presented BACnet to businessmen, academics and government officials of the Ministry of Construction. The same delegation visited Tokyo and Osaka in 2002 to make presentations at the “International BACnet Symposium” sponsored by the Institute of Electrical Installation Engineers of Japan. In more recent years, he visited Seoul to present a BACnet update to the Intelligent Building Society of Korea; attended the launch of the BACnet Interest Group – Middle East in Dubai, UAE and then went on to Moscow to speak at SHK 2004. Over the last 10 years, he has participated in ISO/TC 205 meetings in Seoul, Paris, Cairo, Delft, Kyoto, Sydney, La Rochelle, Stockholm, and Wuxi..

In 1999 Mike was selected by the Twin Tiers Chapter of ASHRAE to receive its Engineer of the Year Award and, in 2001, received an award of the same name from the Broome Chapter of the New York State Society of Professional Engineers.

Eric has been in the controls industry since 1979. His passion for controls and the desire to provide an easy way for HVAC professionals to keep up with the rapid changes in controls technology inspired him to create Controltrends.
All Posts »
PrevPreviousWhere is Kenny?
NextContemporary Controls’ George Thomas Inducted Into ControlTrends Hall of FameNext