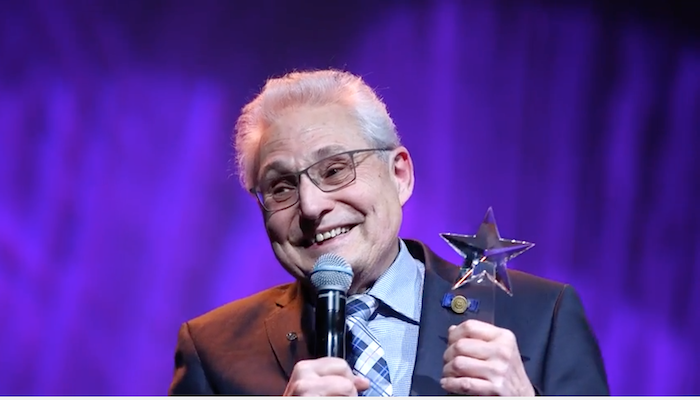 Perhaps the greatest highlight moment of the 2015 ControlTrends Awards was the special pleasure of watching Automated Buildings’ editor and owner, Ken Sinclair, induct Hans R. Kranz into the ControlTrends Hall of Fame. Hans’ incredible sixty year career in the HVAC industry began at the age of 14, and progressed with one achievement after another, becoming known as the father of Standard BACS Functions. Hans has served on the Presidial Board of DIN (German Standardization Institute), is a member of the DKE (German Electrotechnical Commission) and the VDI (Association of German Engineers with 150,000 members). For more on Hans Kranz’s outstanding life achievements and biography, please see below.

2015 ControlTrends Hall of Fame Induction from Eric Stromquist on Vimeo.

Hans was a member of the Board of the VDI Division Civil Engineering and Building Services, and remains a Senior Advisory Board member, and has been a member of ASHRAE for over 20 years, heading up the committee that developed the BACS Standard Specification Texts for the German Construction Ministry — for use in all public projects. He recently authored BACnet 1.12 Building Automation, in German, and he authored a book on the basics of building automation and building control along with over 200 technical articles.

As a Fellow of REHVA (Federation of European Heating, Ventilation and Air Conditioning) and honored member of the VDI and DIN, Hans chairs the standing VDI Standard Project Committee 381, which developed the BACS Functions and the BACS Function List that later became Part 3 of the ISO Standard 16484, with BACnet as Part 5. In ISO/TC 205, he headed up the German delegation and served as project leader for Parts 1, 2 and 3 of the global building automation standards. He is also chairman of the terminology project VDI 4700 and member of the DIN and DKE Terminology Groups for Control Technology as well as the German representative for the REHVA dictionary. He has been chair of many other successful VDI guidelines that were translated into both English and Russian. The Russian Association of Engineers for Heating, Ventilation, Air-Conditioning, Heat Supply and Building Thermal Physics (ABOK) appointed Hans as Honorary Consul for Western Europe.

Hans already installed heating systems at construction sites from the age of 14(!), helping to rebuild his hometown Nuremberg, which was almost completely destroyed during World War II. He studied in the evenings to pass the general qualifications to enroll at university. In 1965, he began his studies in electrical engineering and control technology at the “Technische Hochschule Nürnberg Georg Simon Ohm”. Among others, he learned Algol and Fortran programming and already used analog computers. During the widespread student protests and university closings from between 1967 and 1969, he visited the U.S.A., hitchhiking across 26 states and worked in Canada and on board a Miami-based Norwegian cruise liner as a bartender and electrician. In 1970, he was awarded the degree of “Diplom-Engineer” (similar to a master’s degree) in his field. Subsequently, he joined Honeywell as a product manager for a heating optimizer, but preferred to work on construction sites.

Due to his experience, he became a pilot project leader for new products, one of which was Europe’s first programmable, full digital building automation system, the Honeywell Delta 2000, and the first solid-state controllers Micronic. To simplify the work of his successors, he set out to develop company standards. After five years, Hans moved on to a consulting office for the design of IBM’s first megachip factory in Europe. In 1980, Hans was promoted to head up the environmental protection facilities monitoring system by IBM. His specification at that time already used the term “Building Automation and Control System (BACS)”. He also promoted the introduction of DDC technology for HVAC. To enable DDC communications he developed communication protocols together with Johnson Controls, Honeywell,and Landis & Gyr (Powers).

Hans was given the task of presenting this innovation to a facility manager review meeting. As a result, he was charged with introducing a uniform protocol for all IBM suppliers. He came across a team at IBM Atlanta that had developed GPAX (General Purpose Automation Executive). As a result. Hans went to Atlanta in 1983 and acquired the newly developed IBM protocol FACN (Facilities Automation Communication Network). This protocol ended up being used in many buildings across Europe. During his time in Atlanta, he influenced Ken Oshman, the future CEO of Echelon, with regards to data communication in building automation and control. FACN influenced the development of ASHRAE’s BACnet and became the blue print for the FND (Firm Neutral Data Protocol) in Germany. For Hans it was always clear that the ASHRAE protocol would be the solution of the future, thus writing about it in 1993 in his book. Of course, this resulted in conflict with the German public sector, which promoted FND. In November 1989, he received IBM’s Quality Award from IBM’s CEO for early commissioning of the BACS in the world’s largest data center AMADEUS for travel bookings.

After a number of successful GPAX/FACN projects, Hans was approached to participate in the new management team of Siemens Building Automation at their headquarters in Karlsruhe. As head of sales and marketing, Hans was also responsible for standardization and training. His main task was to prepare the entire workforce for the big merger with Landis & Staefa. Hans worked to prepare Siemens’ merger with Landis & Staefa for the European antitrust-committee, part of which was to organize the sale of Siemens products by the Landis & Staefa’s sales force in the German headquarters Frankfurt.

After learning of Mike Newman from the minutes of ASHRAE SPC 135, he met him for the first time in 1996 during an ISO meeting in Harrogate, UK. Both discovered many common interests and experiences that marked the start of a profound and lasting friendship. Starting in 1998, Hans became part of the global Siemens Building Technologies headquarters Zug, Switzerland, and served as Manager Business Process Management. During this time, he promoted open communications with BACnet against Profibus and KNX, and integrated KNX mapping into BACnet. He also introduced a better bidding method using the BACS functions and standard specifications along with many other activities in standardization and training.

In 2004, Hans retired, but began freelancing even more intensively for standardization and BACS training. In October 2002, Hans received the medal of honor of VDI; in November 2010, he was awarded the Medal of Honor of DIN; and, in June 2013, he was granted the status of REHVA Fellow. Hans was a founding member of the BIG-EU (BACnet Interest Group – Europe) and their auditor. He contributed to the development of BACnet through translation and adaptation to the European market of NISTIR 6392, the GSA Guide to Specifying Interoperable Building Automation and Control Systems using ANSI/ASHRAE Standard 135-1995 – BACnet, – published by the National Institute of Standards and Technology (NIST) – still used by the U.S. federal government and German speaking countries. His German BACnet books BACnet 1.4 and BACnet 1.12 were an invaluable asset for BACnet’s penetrating of the European market.

For decades, Hans initiated courses for building automation and control at various universities on behalf of the VDI. At many institutions, he was and is a guest lecturer. He is the author of Building Control: Technische Gebäudesysteme; Automation und Bewirtschaftung (Building control: technical building systems; automation and management), an award-winning antiquarian book that was published by Expert Verlag in 1993 and 1996. You can buy it for EUR 462.-on Amazon or you can ask Hans for a PDF at hans@kranz.com. This book served as roadmap for subsequent development of the building automation industry. And how he achieved that is yet another exciting story. Hans also served as a consultant to the architects of the new parliament buildings in Berlin, to several private companies, the U.S. East Camp Grafenwoehr for the UFGS (Unified Facilities Guide Specifications) and the Fraport (Frankfurt Airport, the largest airport on the European continent).

He served as a German expert and head of delegation to the International Organization for Standardization ISO/TC 205, Building Environment Design, at meetings anywhere in this world, and was chairman of the German shadow group in DIN. From 1996, he has participated in all ISO/TC 205 meetings including the meeting in Delft (NL) 2008. He prepared the development of Part 4 “Room Automation” and Part 7 “BACS Contribution to Energy Efficiency” of our global ISO standard for BACS.

In June 2007, Hans was keynote speaker and moderator at the 9th REHVA World Congress Clima in Helsinki. Additionally he was involved in a BACnet seminar in Sydney, Australia. At the Building Performance Congresses in Frankfurt from 1998 to 2008, he served not only as organizer, but also moderator and speaker. In 2005, Hans was a member of a delegation to Tokyo that presented BACnet and the BACS functions to businessmen, academia and government officials of the Ministry of Construction, sponsored by TEPCO (Tokyo Electrical Power Company). In recent years, he has visited Seoul, Moscow and Limassol (Cyprus) to teach Siemens employees about BACS and BACnet. He initiated and attended the launch of the BACnet Interest Group – Sweden, Finland and Russia, where he is considered a grandfather to the group and is member No. 001 (BIG-RU calls him “godfather”).

Hans initiated the VDI BACnet courses and conducted them for several years together with Frank Schubert. He still performs in-house training courses for companies, for example, next week for the Ministry of Construction in Berlin. Some time ago Steve Bushby of NIST, convener of ISO/TC 205/WG 3, appointed Hans an “honorary American”. On top of all this, Hans is married to Barbara. They – but especially Barbara, raised three children and were rewarded with five wonderful grandchildren. Their son Sven recently became a professor at Florida State University in Tallahassee.

Eric has been in the controls industry since 1979. His passion for controls and the desire to provide an easy way for HVAC professionals to keep up with the rapid changes in controls technology inspired him to create Controltrends.
All Posts »
PrevPreviousEpisode 3: Mike Marston’s BAS Control Pub Talk with Brian Anderson
NextControlTalk NOW — Smart Buildings VideoCast and Podcast for Week Ending March 20, 2016Next