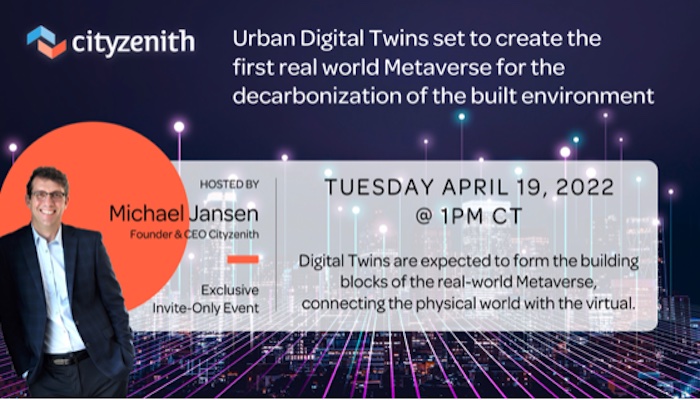 What do you get when you cross the Metaverse, Digital Twins and a progressive company like City Zenith?

The opportunity to solve problems that in the past would have been difficult, if not impossible, to solve. Before these new technologies solving enormous problems like reducing global carbon emissions would have taken too long and cost too much money for a company to solve.

That is changing with IOT, the metaverse and digital twins. Most of us in the Smart Building Controls Industry are very familiar with IOT. It has become a part of what we do as integrators. But ask someone to define the metaverse and most of us don’t have a clue.

There is a good reason for this, the metaverse is still in its beginning stages and talking about what it is would be like someone in the early days of the internet with an AOL account telling you everything about the internet.

Neal Stephenson created the term Metaverse in his 1992 sci-fi novel Snow Crash. He used it to describe an all-encompassing digital world that existed parallel to the real world. That is about as good a definition as I could find.

Which is very similar to the definition of a digital twin. A digital twin is a virtual model of a process, product, or service. In our industry, most likely a building. When we pair these physical and virtual worlds, we can simulate, monitor and analyze data which can solve problems and plan for the future. Which is what City Zenith is doing.

Real estate accounts for about 40% of global greenhouse gas emissions. The race is on to lower emissions in buildings and entire cities. One method is creating digital twins,to optimize all aspects of planning, construction and ultimately operations and regular maintenance. Research from Ernst & Young said Digital Twins could reduce urban carbon emissions by over 50%, while also reducing operating costs for asset owners by 35%. Further, ABI Research said this could cause US$280bn in cost savings by 2030.

When I think of digital twins, I think of City Zenith. City Zenith creates next generation software tools for building professionals. Headquartered in Chicago with hubs in New York, London, and New Delhi, the company is the world’s leading urban Digital Twin platform provider. Check out our 2016 interview with Michael Jansen, the CEO of City Zenith.

This brings me to the purpose of this post, which is to let you know City Zenith is hosting a free webinar: Urban Digital Twins set to create the first real world Metaverse for the decarbonization of buildings. The event takes place on April 19 at 1:00PM Central time. You can register by clicking here.

Eric has been in the controls industry since 1979. His passion for controls and the desire to provide an easy way for HVAC professionals to keep up with the rapid changes in controls technology inspired him to create Controltrends.
All Posts »
PrevPreviousKen Sinclair’s Automated Buildings March, 2022 Edition: “Women Creating Amazing Opportunities”
NextNews Flash: Project Haystack Announces New Members and Call for Articles and Advertisers for Summer Issue of Connections MagazineNext