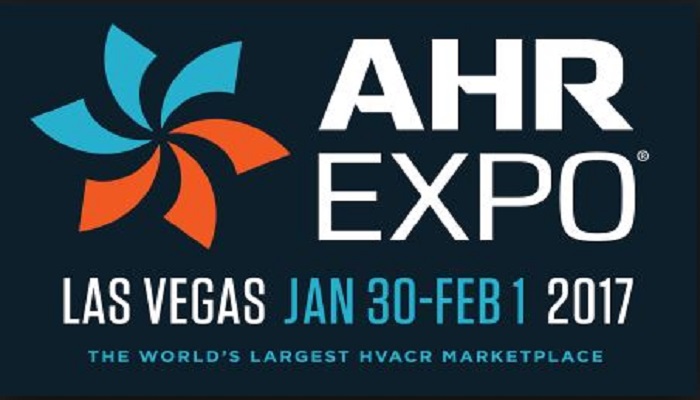 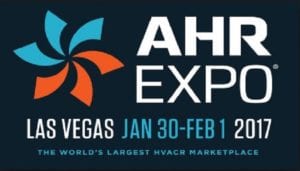 “We are beyond proud to see evidence that the AHR Expo continues to grow in both attendance and size, as well as in alignment with the HVACR industry at-large,” said Clay Stevens, president of International Exposition Company. “It’s such an exciting time for the industry right now, and that was prominently reflected in the level of enthusiasm and the wide scope of ingenuity seen on the 2017 Show floor in Las Vegas. We look forward to our continued production of this premier platform for HVACR innovation, idea exchange and business development, and specifically to our 2018 Show in Chicago.”

The 2017 Show’s nearly 11.5 acres of exhibit space was occupied by 1,968 exhibitors, 259 of which participated in the AHR Expo for the first time. A notable 20,047 exhibitor personnel staffed the exhibits in Las Vegas, representing a majority of the U.S. geographic landscape, as well as 32 outside countries.

“We’ve been exhibiting at AHR Expo for more than 10 years – it has consistently proven to be a well-organized Show, and provides a good turnout of attendees,” said Mark DeNovellis, global product manager for Amphenol Advanced Sensors in St. Marys, Penn. “There was a really good mix of international visitors this year in particular, and I believe this is in part due to the fact that Las Vegas is a destination draw for international travelers. Overall there was lots of energy and excitement on the Show floor.”

In addition, exhibitors at the 2017 AHR Expo underscored the importance of the Show’s ability to facilitate face-to-face interaction as part of the annual exhibition experience.

“Participating as an exhibitor at this year’s AHR Expo gave us a lot of opportunities, the best of which was meeting customers we talk to all the time but never really get to see in person,” said Kyle Cruise, outside sales for Connect-Air in Auburn, Wash. “Hands down, this was an event worth attending, and we already can’t wait for 2018.”

“This is a very large world, and yet we operate in a fairly intimate industry,” said regional sales leader Mike Stiltner of Haier in Wayne, N.J. “It’s so important to get in front of current and potential customers, while staying in touch with where the industry’s going. We participate in about six shows a year, and this is the best by far – the largest audience, the greatest mix of attendees, the broadest opportunity to compare our products to the competition.”

“I’d summarize my experience in two words – great conversations,” said Lindsey Ford, manager, multi-channel communications at Rheem Manufacturing Company in Atlanta. “We saw a broad mix of customers, and the conversations felt warm and engaging. My favorite part of this year’s Show was the high energy level – the economy has really been picking up, and it definitely reflected on the AHR Expo floor. It was also rewarding to see attendees engaged in the hands-on interactive components of our booth’s product and prototype displays.”

“We really value the AHR Expo as an ideal place to see customers each year,” said Dennis Jones, key account manager at Duluth, Ga.-based SWEP North America, Inc. “We also appreciate how the Show helps us generate quality leads. Having the show in Las Vegas was a great move on the part of Show management as well.”

Several exhibitors underscored the benefit of The Show’s location in Las Vegas this year, noting the region as an appealing draw in numerous respects.

“We’ve been AHR Expo exhibitors for many years now, and there was a noticeable advantage to us in its location in Las Vegas for 2017,” said key account manager Chris Pence of Fireye Inc., in Derry, N.H. “This is the only show at which our company exhibits each year, so it’s important we maximize our reach in as many ways as possible. Vegas provided a lively and unique venue for us to meet many of our customers face-to-face. They expect us to be at AHR Expo, and we feel like we were able to be here in a big way this year, in part thanks to the regional location of the Show.”

“Introducing new products is one of the most important components of our exhibition strategy at AHR Expo,” said Davidson, N.C.-based Trane’s director of marketing, Kevin Stamets. “We had 120 people from Trane working this year’s booth, and we needed every one of them. Attendance was strong, and booth traffic was steady.”

Numerous attendees echoed the enthusiasm of exhibitors at the 2017 AHR Expo in Las Vegas, and particularly noted its breadth of value in displaying new products and technologies, offering valuable education opportunities, and providing a unique opportunity for networking.

“This was my first time attending AHR Expo, and I had an amazing experience,” said Miami-based HVAC technician Felix Santos, of All Air Solutions. “I was impressed by the well-organized nature of the Show overall, as well as the knowledgeable booth staff. Our main goal in attending the AHR Expo was to see what’s new in contractor tools, but the actual benefit went way beyond this. I enjoyed a variety of valuable presentations, found some great networking opportunities, and was even able to interact with our competitors. I’m new to the industry, and can see right away that this is the place to be. I’ll definitely attend the Show next year in Chicago.”

“I attended the last Show in Las Vegas, and this year’s was definitely even bigger,” said Rocky Mountain Boiler Inc. vice president John Beins of Idaho Falls, Idaho. “It’s great to view all the new technology on display, and to have the opportunity to actually see and try out products in the manufacturers’ booths. We’ve been in business for 24 years, but it’s important to stay on top of what’s new in the industry to maintain our success.”

Like many exhibitors, attendees additionally noted their enjoyment of the Show’s location in Las Vegas this year.

“I’ll be honest, this was my first time in Vegas, so it was great to combine work and fun, and be able to bring my wife along,” shared John Hynak, owner of Hynak A/C & Refrigeration in Moscow, Penn. “There was a great deal to see on the Show floor, and those manufacturers providing tool demonstrations in their booths really stood out to me. The mix of sales reps and engineers staffing the booths was also really helpful. I was able to take advantage of several educational classes during the week, including ‘How to Grow Debt-Free While Generating Cash,’ and ‘Business UN-Complicated! Create the Business and Life You Want.’ I’d say, without a doubt, that this year’s AHR Expo was such an incredibly beneficial and enjoyable experience all-around.”

Summarizing the success of the 2017 AHR Expo in Las Vegas, exhibitor Steven Santoro, senior sales manager at Woburn, Mass.-headquartered Vaisala, Inc. shared, “The aisles were packed. Our booth was packed. We found ourselves not being able to leave the Show floor, and wishing for more square footage.”

The next AHR Expo, co-sponsored by ASHRAE and AHRI, will be held January 22 to 24, 2018 at McCormick Place in Chicago. For additional information, visit ahrexpo.com.

The International Air-Conditioning, Heating, Refrigerating Exposition (AHR Expo), which began more than 85 years ago as a heating and ventilation show, has now grown into one of the world’s largest HVACR events. The Exposition is held annually in key markets and major cities across the U.S., hosting close to 2,000 exhibitors and bringing in crowds of 65,000 industry professionals. The Show provides a unique forum for the HVACR community to come together and share new products, technologies, and ideas. The event is co-sponsored by ASHRAE and AHRI, and is held concurrently with ASHRAE’s Winter Conference.