StatTalk: Warren S. Johnson Patented the Thermostat in 1883. Thanks ASME Milwaukee for the History & Heritage

The endless proliferation of technology, mega-competition and marketing, and most recently, economic imperatives like residential demand response have so overwhelmed the thermostat industry, that the inventor of the first electric thermostat, Warren S. Johnson, is seemingly unremembered. Thanks to ASME Milwaukee for keeping the History and the Heritage of the Giants of our Industry alive.

“Be it known that I, Warren S. Johnson, of Whitewater, in the county of Walworth, and in the State of Wisconsin, have invented certain new and useful Improvements in Electric Tele-Thermoscopes; and I do hereby declare that the following is a full, clear, and exact description thereof.

My invention relates to devices adapted to indicate, at any convenient point, the relative temperature in rooms, conservatories, cellars, & etc., situated at a point remote from the indicators of my device; and it consists of certain peculiarities of construction, as will be more fully set forth hereinafter.” Warren S. Johnson, 1883 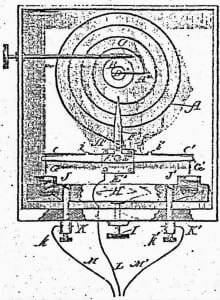 So begins the 1883 patent description of the bimetal-actuated electric thermostat which was the original invention of Warren Johnson, a professor at State Normal College in Whitewater. Receiving the patent led leading to the founding of the Johnson Electric Manufacturing Company in Milwaukee with the backing of hotelier and packing heir William Plankinton. That invention, shown at the left, was the first of several from the future Johnson Controls produced that today control the systems that keep us comfortable.

A rapid succession of improvements followed. In 1895 Warren Johnson patented a pneumatic thermostat that was the first application for regulating heating systems and subsequently became an industry standard.

Co-Founder and Co-Chairman of the CTA Awards. HVAC and Security Sales Engineer and Integration Consultant with over thirty years of industry experience.
All Posts »
PrevPreviousBryan Pike From AIC Wireless at IBcon 2013
NextEric’s Favorite Video of The WeekNext