Industry Giants Series: Tesla vs Edison — ABB Tells a Great Story About the War of Currents 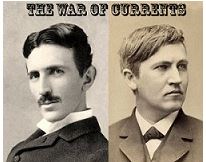 Imagine that it’s 1887, and you’re getting ready to invest in one of two of the most exciting innovations likely to power America’s future. Thomas Edison, inventor of the light bulb and heralded father of electricity, has invited you to his mass demonstration held in West Orange, New Jersey, where he is to expose the lethal dangers of AC current. To wit, he has attached a 1,000 volt AC generator to a metal plate, upon which a dozen animals stand upon. A suspenseful moment later, the animals were publically electrocuted.

Naturally, the press corps went frantic and soon after this “electrocution,” the electric chair went into production. Edison was determined to publicly undermine George Westinghouse, his “current” rival. Perhaps unbeknownst, to most of the on-lookers, Edison was trying really hard to protect his investment into 121 power stations across the United States. (You should see what he did to Topsy, the elephant.)

ABB’s Press Release Tells a Great Story. This is a very interesting and still-developing story. The war of currents is NOT over!

Perhaps the biggest technology debate that shaped the power industry was played out in New York in the 19th century: AC (alternating current) versus DC (direct current).

Few remember the debate itself, but the characters are still well known. You had Thomas Edison (image, right) and GE on one side, pushing for the power transmission and distribution system to be based on DC. On the other side, Nikola Tesla (image, left) and Westinghouse put all their effort into promoting AC. With electricity supplies in their infancy, much depended on choosing the right technology to power homes and businesses across the country.

This was when the industrial revolution was accelerating in the US and famous men like Andrew Carnegie, JP Morgan and others where known for their aggressive industrial growth practices, and the two sides in this conflict didn’t have too many scruples either: DC’s leading supporters often resorted to very questionable marketing practices to exaggerate the dangers of AC.

But the dirty tricks didn’t help and the War of the Currents was won by AC, which has been the platform for electrical transmission across the world since that time

However, New York City, being the battle ground for this war, had already invested in a number of Edison DC installations, and these of course continued to work for many years alongside the growing AC network. It wasn’t until 1927 that New York decided to replace the DC equipment, and it wasn’t until 2007 – just four years ago – that the last of it was removed – a full 125 years after the end of the War of the Currents.

But while AC was perfectly adequate for the conditions of the day – and for much of the 20th century – the needs of the 21st century are showing its limits. And the irony is that, although Edison lost the battle, his direct current is making a comeback just as New York City has finally rid itself of the standard. Today, it is not a question of AC versus DC, but of AC and DC.

This is because we are facing a revolution in the way our electricity is produced and used. On the production side, more and more electricity is being generated from renewable sources of energy either in remote areas (hydropower plants in mountains far from urban centers, offshore wind farms) or locally (rooftop solar panels). DC is the only technology that allows power to be transmitted economically over very long distances, and DC is the type of power produced by photovoltaic panels.

As far as using power is concerned, more and more equipment runs on DC, such as computers, cell phones and LED lights. At the moment, each of these appliances uses its own rectifier to switch power from AC to DC. A much more efficient solution would be to convert the power in a larger rectifier as it enters each building. ABB estimates the savings from using DC instead of AC in buildings could be in the order of 10 to 20 percent.

Losses could be further reduced by converting power to DC at the substation level and distributing DC power throughout an entire district, or even by transmitting, distributing and using power as DC. For these scenarios some technological challenges remain – such as the development of DC breakers – but will likely be overcome within a few years.

Batteries are another technology that runs on DC power and there are more and more of these around us storing excess power produced from renewable energy installations during favorable weather conditions and powering electric cars.

It would be impractical and expensive to implement DC distribution grids where AC distribution grids already exist, but DC may increasingly become the solution of choice in new districts or cities, where new communities are electrified for the first time, and where electrification “islands” (not connected to the main power network) are created. Such islands include new ships and communities generating their own power from renewable resources.

DC distribution would be particularly attractive for communities using power generated by photovoltaic solar panels, since this is already DC power and currently has to be converted to AC before distribution.

In addition, DC offers greater capacity per power line, reducing the weight and size of power equipment throughout the grid and home, and can help to improve the reliability of power supplies as it is easier to control the voltage on DC lines and because DC connections do not cascade faults and cause blackouts the way AC lines can do.

The main benefits of DC based grids would be:

Source: ABB in the United States

Co-Founder and Co-Chairman of the CTA Awards. HVAC and Security Sales Engineer and Integration Consultant with over thirty years of industry experience.
All Posts »
PrevPreviousControlTrends Hangout: Episode Three – Using Social Media in The HVAC Industry
NextKen’s TOP 5 Information Pivot Points of Week 32Next