Are You in Pendulum Jeopardy? It Should be Social WE-dia not Social ME-dia 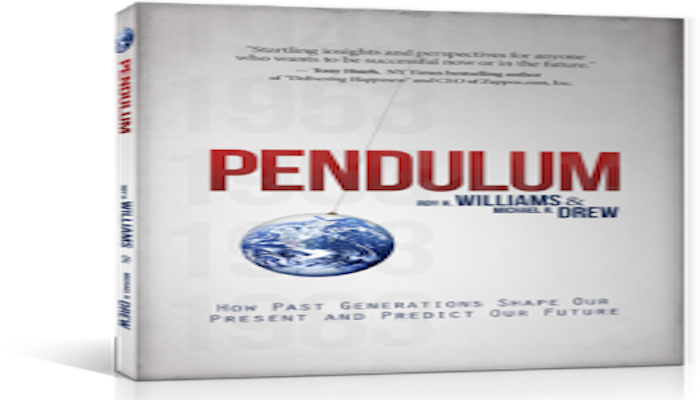 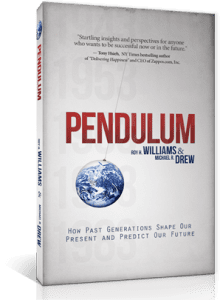 The book Pendulum by Roy H. Williams and Michael R. Drew is said to be a veritable blue-print of our civilization for the last 3000 years. Williams and Drew have chronicled how past generations — shape present generations, and are able to predict the actions of future generation — so accurately, that if you don’t seriously consider the contents of the Pendulum, your next marketing campaign, product release, or business venture could be in serious jeopardy and fail, because you weren’t in sync with the “Me”-“We” Pendulum cycles that operate with all the subtle certainty and force of time and gravity. McDonald’s marketing adherence to the Pendulum theory provides compelling testament.

Now that I get what the Pendulum says and operate as a newly converted Pendulumist, I examine most things through the Pendulum-lens for compliance, whether it’s a new product, new advertisement, new television series, or the latest multi-million dollar marketing campaign. It’s apparent that many of these new aspirations have not yet read the Pendulum.

Bear in mind that we are in the middle of a serious “WE-upswing,” that began in 2013 and is not particularly favorable to the individual and that it will be another ten years before the direction of the Pendulum reverses and starts downward towards the next “Me” swing with all its new implications. The Pendulum’s present state places a clarion warning out to avoid “Me-first style” marketing and tells us to be wary of witch hunts and other unsavory actions taken against “Me-thinkers” and “Me-things.”

Questions. If something is to be successful shouldn’t it be correctly oriented to current “We” sided thinking? No wonder there is so much reluctance and inherent resistance by certain people to partake in Social Media. They can’t get on board the social me-dia train because they just don’t like it, or doesn’t feel right. Maybe, if the whole social media culture had been in true synch with the Pendulum, it would have been called social We-dia, and everyone would be social wedia-ists, right?

Anyhow, what does the Pendulum have to do with the HVAC world? And what kind of insight does the Pendulum offer in the marketing of a smart, high-tech, data generating, talking thermostat? In this keen battle for domination of the smart thermostat market, there may be very good reason to pay attention to the Pendulum, and the manufacturer using the “We-style” marketing approach would seem to have a significant advantage over the other manufacturers who are using the ill-timed “Me-style” approach.

Now, let’s take a look at these thermostat marketing campaigns… And their successes…