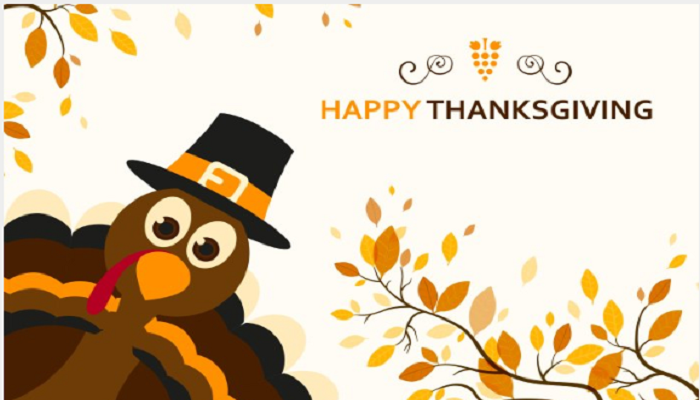 Thanksgiving is believed to have been celebrated first in 1621 when the Plymouth settlers enjoyed a fall feast to celebrate a bountiful harvest with the local Wampanoag Indians.

We wish everyone a wonderful, relaxing, and peaceful Thanksgiving Holiday. For those that must work or serve through the Holidays, we greatly appreciate your faithful service.

The history of Thanksgiving Day from Reference.Com: Thanksgiving is celebrated in the United States as a national holiday dedicated to being with family and friends to give thanks for all of the blessings received throughout the previous year.

The holiday is believed to have been celebrated first in 1621 when the Plymouth settlers enjoyed a fall feast to celebrate a bountiful harvest with the local Wampanoag Indians.

Prior to the event that is believed to be the first Thanksgiving, harvest feasts were practiced in New England, though they did not catch on as a yearly event. According to most historians, the tradition of having these harvest feasts came over to America with the Puritan and Pilgrim settlers from England. During this first feast, the attendees dined on pumpkin, turkey, goose, corn and other items that are now common at Thanksgiving dinners.

As per most historians, the settlers did not intend for this to be a yearly feast when they began it. The tradition of a yearly Thanksgiving feast did not become official until President George Washington declared that the nation would celebrate with a day of Thanksgiving on November 26, 1789. President Abraham Lincoln wrote a proclamation declaring that all states in the union would celebrate the day in 1863. President Franklin D. Roosevelt signed a resolution from Congress on December 26, 1941 that moved the official date of Thanksgiving from the last Thursday in November to the fourth.

“After a good dinner one can forgive anybody, even one’s own relations.” ― Oscar Wilde, A Woman of No Importance