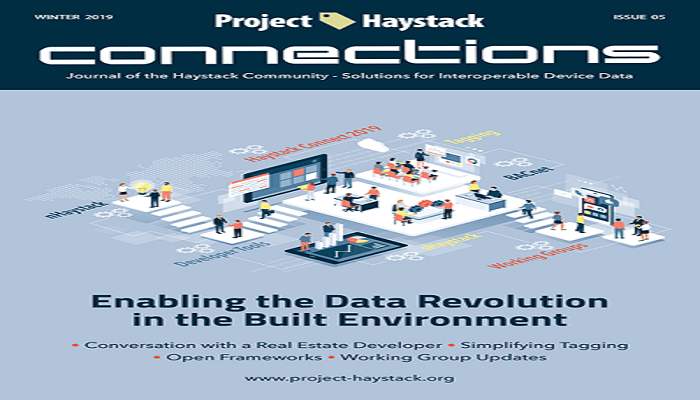 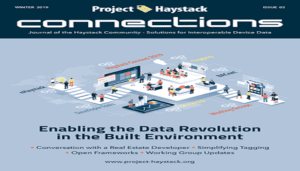 The Project Haystack Organization, a collaborative community addressing the challenge of utilizing semantic modeling and tagging to streamline the interchange of data among different systems, devices, equipment and software applications, today announced the publication of their fifth issue of Haystack Connections Magazine with 62 pages of interviews, articles and tools, from companies around the world including Bedrock Detroit, Nube iO, BTIB, Lynxspring, BuildingFit and Tridium, to name a few.

The Connections Magazine Winter 2019 issue reports on the latest news from the Project Haystack community from around the world and documents how rapidly the data revolution is overtaking the built environment. Both IT and OT contingents are recognizing that sematic data modeling and metadata tagging is key to clearing the hurdles related to ease-of-use, unified data flow, edge-to-cloud, and data security. Not to be missed is the fact that the storytellers in this issue include the end users of the data generated by equipment systems including commissioning experts, smart building consultants, large-portfolio property managers and developers – all of whom are demanding smarter, interoperable solutions, and companies that are responding by providing Haystack-compatible products and solutions.

“The theme of this issue of our Connections Magazine is ‘Enabling the Data Revolution in the Built Environment’. Given the number of projects, events and work in progress by the Haystack community around the world, this seemed an appropriate theme for this issue,” said John Petze, Executive Director of the Project Haystack Organization. “Our major effort this year will be the 4th biennial Haystack Connect Conference (http://www.haystackconnect.org), scheduled this May in San Diego. The worldwide Haystack community is gearing up for this unique event.”

“This issue of Haystack of Connections demonstrates not only the growing acceptance of the value of the Haystack methodology, but also the wide range of real world implementations,” added Marc Petock, Executive Secretary of the Project Haystack Organization. “The battleground has opened up to who has the products and services that provide the best solution for automatically tagging data, works within an open framework that supports Haystack, and can most effectively create value from this new abundance of semantic data.”

The 62-page Connections Magazine Winter 2019 issue includes an interview with Joe Pattenaude,
Director of Building Systems at Bedrock in Detroit, Michigan, a featured profile of the newest member of Project Haystack, BuildingFit, and community-contributed articles by BASSG, BuildingFit, Intellimation, J2 Innovations, Lynxspring, and Nube iO. Featured are some of the latest tools and services that support Haystack from BTIB, J2 Innovations, Lynxspring, OnBoard Data and Tridium. This issue also includes updates on technical resources, Project Haystack Working Groups, as well as the Project Haystack Organization roster of members.

The Project Haystack Connections Magazine Winter 2019 Issue is available for download at https://project-haystack.org/file/32/Haystack-Connections-Magazine-Winter-2019-Issue-5.pdf.

Information about Haystack Connect 2019 sponsorships, speaking opportunities and registration to attend is available at https://www.haystackconnect.org.

About Project Haystack: Since its formation in March of 2011, the Project Haystack Organization (a 501(c) non-profit trade association) has been providing the industry with an open-source, collaborative environment to address the challenge of making data self-describing using semantic modeling, also known as data tagging. The work developed by the Project Haystack member companies and community streamlines the process of managing, presenting and analyzing the vast amount of data produced by smart devices and equipment systems. The Haystack methodology can be used with virtually any type of system and device data and is not tied to any vendor or communication protocol. More information about Project Haystack is available at: https://www.project-haystack.org.

Co-Founder and Co-Chairman of the CTA Awards. HVAC and Security Sales Engineer and Integration Consultant with over thirty years of industry experience.
All Posts »
PrevPreviousImages from the 2018 ControlTrends Awards
NextACI Releases NEW BACnetTM Sensor LineNext