Mitigating the Labor Shortage in the HVAC Field by Mike Gallagher, PE and Karine Leblanc 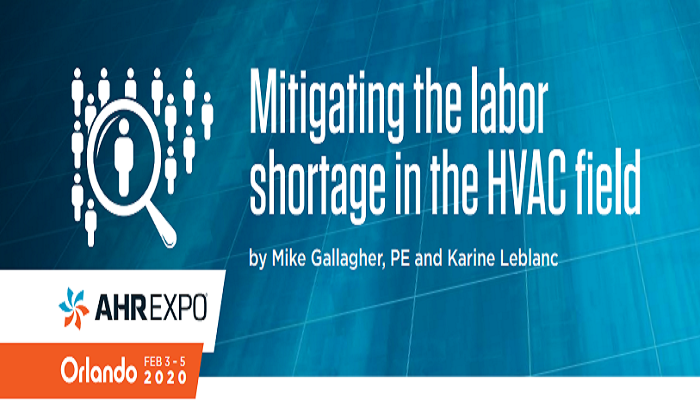 Our society has, in large part, dropped vocational education classes in high school, spurred by the thought that one requires a four-year degree or otherwise aren’t on equal footing. In doing so, roughly 40% of our young adults are left without clear direction. Investing in the trades helps every person in our society have a career option.

AHR Expo Expert Council Member Karine Leblanc partnered with Mike Gallagher, P.E. and President of Western Allied Corporation, to discuss the labor shortage and its potential to affect the HVACR industry in the next decade. Mike discusses his experience in hiring skilled workers and the challenges the industry needs to consider to secure a strong future ahead for the workforce

Additionally, Karine will host a session in the 2020 AHR Expo Education Program discussing emotional intelligence as it relates to business management and employee relations. Her session, Applying Emotional Intelligence (E.Q.) to Strengthen Your Business Model and Customer Relationships, will be held on Monday, February 3 from 10:30 AM – 11:30 AM in W310A.

Getting the right people on the team has always been essential for any company, in any industry, and HVAC is no exception. Why, then, has the issue become more pressing in HVAC in the past decade? To understand the situation (and understanding is essential before any workable solutions can be generated), it is useful to view the issue in context. We’ll start with field labor, which is both the hardest to do without and the easiest to improve. Young adults graduating high school and contemplating their future career options are oftentimes simply unaware of HVAC as an option.

While this is true for both field and office professionals, it is a far more pressing issue for field workers. This is likely because they tend to make their choices earlier. Of course, that is not always the case as we see a surprising number of apprentices now who are shifting careers to HVAC between the ages of 25-35, and sometimes older. At this point they are more settled than the younger age group and most have decided they like the better income and personal job satisfaction that comes with building and maintaining buildings.

I don’t see those guys every day, but I see several every year. About 1/3 of my current service tech staff fits the second career profile,” said Mike Gallagher. “The percentages are lower for sheet metal and hot side pipe fitters (black pipe welders), but the trend is similar. However, for the sake of this conversation I’ll speak to those coming out of high school who are considering something other than a four-year degree. That is the market that we most need to be hitting more effectively from a field standpoint.”

Our society has, in large part, dropped vocational education classes in high school, spurred by the thought that one requires a four-year degree or otherwise aren’t on equal footing. In doing so, roughly 40% of our young adults are left without clear direction. Investing in the trades helps every person in our society have a career option.

Many very successful people did not choose the four-year degree route, and that gets lost in the background noise,” continued Gallagher. “Unfortunately, most career messaging provided by the junior high and high school systems have not caught up to that reality. They don’t recognize or tout that most service field foremen are incredibly talented individuals. In fact, the industry now demands this as any significant building is digitally controlled and requires a rigorous skillset.”

The knowledge and training requirements and earning potential within the trades, particularly as compared with devalued degrees (a devalued degree exists when a bachelor’s degree alone is not sufficient to put someone on a viable career track) is not often obvious or even fully understood.

The military has done a great job of communicating that their preparation of recent high school graduates for the job market is in some cases as good or better than college. With regard to HVAC, all major service branches of the military offer HVAC and refrigeration training. As a side note, about 10% of Mike’s service techs came to the industry via learning the trade in the military. For the high school graduate who is not on path for a four-year school or military training, the options that remain are junior college, trade school and “OJT” (on the job training).

For perspective, the last time Mike hired someone directly out of high school was around 1997. It differs somewhat for residential contractors, where any worker who has some experience with tools and proves to be a diligent worker is a viable option for hire. Commercial contractors often then hire technicians from the residential ranks. At some point in a residential tech’s career, if he/she wishes to progress they’ll either need to transition from residential to commercial, or take on more business-focused responsibilities rather than remaining strictly technical.

This leads us to the discussion of training options and what is currently available:

1.   A strong Junior College (JC) program will teach students what they need to know to be a successful residential or very light commercial (5 ton and under circuits) service tech, with some extras thrown in depending upon the program. If the student happens to be working during the day and going to school at night the opportunities are greater since each experience will reinforce the other.

2.   Traditional Trade Schools, particularly private, have closed over the last decade as school funding scandals hit home, and those that remain seem to be somewhat improved as result.

3.   A union apprenticeship includes five years of night school, twice a week, in
conjunction with working. The entrance exam for an apprenticeship typically requires proficiency with high school geometry for admittance. A tech can work in the union without, but he/she can’t take the traditional apprentice/journeyman/foreman training track without passing the apprenticeship exam.

With all of this in mind, below are some areas that can produce results for attracting the future field work force:

1. High school level education regarding the HVAC field. We need to rethink this for our current society. What does this entail? What would a typical day look like? Speakers and representatives from the local community are a good place to start. Finding a way to educate the thinly spread guidance counselors would also be helpful; often a visit directly to counselors at a school, or better yet an entire district, is a good approach, particularly in conjunction with a JC program instructor. Many of these instructors are not skilled at setting up this sort of visit, so bringing in HVAC champions from the area to speak about the trade and the opportunities it can offer is a way we can all support the trade.

2. Industry support at the state level for technical training at all levels.  Contractor’s associations are positioned to do this well. More and better shop and vocational training classes in junior high and high school can also support. Connect with the high school in your school district (or the school district in which your office resides) that still offers shop classes and ask if you can come in an speak to the class. (If they don’t have one, work with your district to launch one if you’re in a position to do so!) Befriend the instructors and offer guidance as many will never have enough equipment or volunteer helpers. We can also enhance Junior College level programs simply by reaching out to program directors and asking how you can help!

3.  Promotion of the trades as careers, both at the high school and JC levels.  Some of this is already happening from contractor groups and unions, but not enough from either. As champions of our industry we need to get involved! Mike once saw a recruiting booth at a JC job fair with a banner that read, “Earn twice as much as a four-year college graduate.” Under the banner was a table that sat three representatives from the local union. Any group from within our industry could help discuss the opportunities.

4. Promote field trades as the best mid-career change choice.  This applies particularly for those looking to see the direct results of their hard work and increased earnings. One of Mike’s field techs joined his crew as a new apprentice at the age of 38. He had previously spent nearly twenty years working as a grip in the film industry.  The pay rate there wasn’t the issue, but rather the hours varied significantly, and overtime hours were not voluntary. Now, he is in his early 50s and last year reported that he’d made 3x what he made in his best years working as a grip. Of course, this was after 14 or 15 years experience in the trade, but the difference is stark. The field trades welcome older apprentices. The financial and work security opportunity is here, but it isn’t advertised enough.

We can’t forget all those that serve the HVAC industry in the office—engineers, construction/project managers, sales representatives and service management. Often a successful office person working in construction possesses a skill set that covers more than one of the above-mentioned areas. The best path to attracting HVAC professionals from these areas seems to be through offering strong internship programs. Internships offer a way to build connections and expand a professional network even before a career has begun.

Likewise, for the employers, internships are a way to forge bonds that progress to the future leaders of our industry. Supporting student chapters such as ASHRAE, MCA and other groups is worthwhile time spent and it will provide early introduction to the ‘stars’ within an academic environment. Host a student for an internship and afterward you can both evaluate whether there is a future together. Having a student intern is the lowest risk, highest reward approach to recruiting. Another great way to be involved is by speaking to the student chapters of the construction-related organizations in your area.  5

It took a long time to get to where we are in this industry, and it isn’ tan issue that will solve itself over night. However, simple things that directly benefit your company (student organization participation and the resulting internships) as well as indirectly benefit the entire industry (increased vocational training in high school and JC) are our way to not just improve our own companies, but also the industry as a whole,” concluded Gallagher.

Mike Gallagher, PE
Mike Gallagher, PE has been in the industry since 1980. For 14 years he was with Carrier, first in heavy applied equipment sales, then as commercial sales manager for Southern California. Since 1994 he has been a contractor at Western Allied Corporation, serving for most of that time in service and retrofit areas. Among other things, Mike is currently President of Western Allied Corporation, an ASHRAE fellow, a local Los Angeles MCA/ARCA board member and on the advisory committee for the Cypress College HVAC program.

Karine Leblanc
Karine Leblanc has worked as an HVAC Sales Engineer for US Air Conditioning Distributors since 2001. She has been active in ASHRAE since her days as a  student of mechanical engineering at Ecole de Technologies Superieure in Montreal, Quebec, Canada. She is an active member of ASHRAE, frequently speaking at chapter events and conferences. As of 2019, Karine serves as a member of the AHR Expo Expert Council.

Co-Founder and Co-Chairman of the CTA Awards. HVAC and Security Sales Engineer and Integration Consultant with over thirty years of industry experience.
All Posts »
PrevPreviousAlexa Who Won the ControlTrends 2014 Plant Controller of the Year Award?
NextAlexa What Year was Belimo’s Werner Buck Inducted into the ControlTrends Hall of Fame?Next