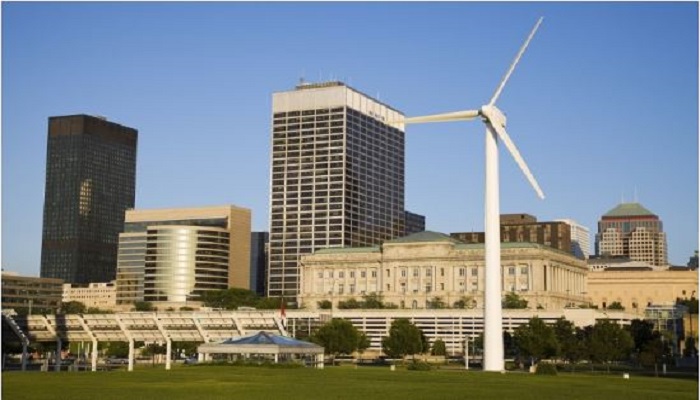 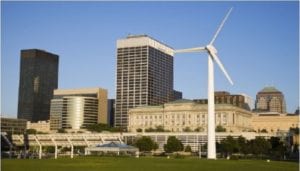 The Energy Department today released a first-of-its-kind assessment of the potential future growth of distributed wind energy in the United States through 2050. Distributed wind differs from utility-scale wind in that it is installed at or near the point of end-use to meet on-site demand, such as at a farm, industrial or manufacturing facility, or rural home. The report titled, “Assessing the Future of Distributed Wind: Opportunities for Behind-the-Meter Projects” quantifies the size of the resource as well as the economic and market potential for locally-produced, clean distributed wind energy at homes and businesses nationwide.

While utility-scale wind capacity has grown more than six-fold over the past decade to its current capacity of more than 75 gigawatts (GW), growth in distributed wind has been more modest and currently supplies only about 1 GW of U.S. capacity. The report released today, which was commissioned by the Energy Department and authored by the National Renewable Energy Laboratory, focuses on grid-connected projects that are located on the customer side, also known as behind-the-meter systems. Distributed wind can also be connected in front of the meter or used in remote, off-grid applications, but these potential opportunities are not assessed in this report.

The report finds that behind-the-meter, distributed wind systems are technically feasible for approximately 49.5 million residential, commercial, and industrial sites. The overall maximum resource potential for distributed wind turbines of less than 1 megawatt in size is estimated at 3 terawatts (TW) of capacity or 4,400 TW-hours (TWh) of generation—more electricity than the United States consumes in a year. Larger megawatt-scale distributed turbines could provide an additional 5.1 TW of capacity or 14,000 TWh of annual energy generation, but in some cases this megawatt-scale resource potential overlaps with areas that would also be suitable for utility-scale (non-distributed) wind development.

Considering “business-as-usual” economics as well as consumer behaviors, the report authors estimate potential future deployment levels of 1.5 GW of cumulative distributed wind capacity by 2030 and 3.7 GW by 2050. Achieving this level of deployment would represent a 300% increase in the market by 2030 and three doublings of cumulative capacity by 2050. If technology costs can be reduced significantly through additional research and development, or if new business models make distributed wind systems easier for consumers to purchase and install, deployment could be much higher. For example, the report finds that with more aggressive technology cost reductions and higher consumer adoption, 3.9 GW of behind-the-meter distributed wind could be deployed by 2030 and 20 GW by 2050.

This analysis finds that distributed wind has the potential to play a significant role in the U.S. electricity sector. Continued efforts to reduce the costs of distributed wind technologies and improve turbine performance will be crucial to realizing this potential. Increasing access to low-cost capital, facilitating consumer adoption, and standardizing site assessment, project development, and installation processes could also be important drivers.

The Energy Department’s Wind Energy Technologies Office leads the nation’s efforts to research and develop innovative technologies, lower the costs, and accelerate the deployment of wind power. Read more about the Office’s support for distributed wind.