ControlTrends invites you to keep a continuous glimpse in review of how our industry’s engineering scaffolding was put into place and ASHRAE’s unending quest for industry standards and excellence. 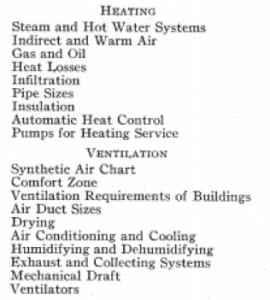 ‘The purpose of this new addition to the Society’s publications is to provide the engineer, the architect and contractor alike, with a useful and reliable reference data book relating to the art of heating and ventilating. A wide range of data within the scope of the field is presented and every effort has been made to present the material in a practical and useful manner.’

ASH&VE, which later became the American Society of Heating and Air-Conditioning Engineers (ASHAE), published The Guide until 1961, when it was merged with the American Society of Refrigerating Engineers’ (ASRE) Refrigerating Data Book, published since 1932, following the merger of the two societies in 1959. The combined publication was called the ASHRAE Guide and Data Book. Separate volumes were issued for Fundamentals and Equipment, and Applications.

In 1967, the information in the Guide and Data Book was regrouped into a Handbook of Fundamentals, with separate Systems, Applications, and Equipment volumes. In 1973, the Guide and Data Book was renamed the ASHRAE Handbook. In 1985, separate I-P and SI unit volumes were issued, and in 1986, a separate Refrigeration volume was established. Although volume groupings have shifted over the years, the name and the essential method by which the ASHRAE Handbook is compiled has continued to the present.